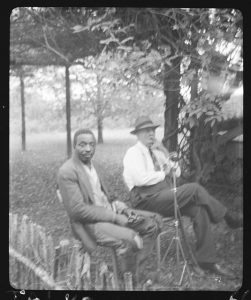 In the first recordings blue grass, Erich Nunn argues the whiteness of Lomax making the informant uncomfortable in his playing. In my other blog, I discussed the tension in recordings that may have risen with Frances Densmore. In this post, this picture shows the collector and the informant, as Nunn describes. The discomfort of the performer with the collector makes me question the authenticity of the recordings. In the recording, Monologues on Accidents, the interaction between the collector and musician becomes awkward the longer they interact:

McTell: Well, that . . . all songs that have reference to our old people here . . . they hasn’t very much stuff of the people nowadays because . . .

Lomax [interrupting]: Any complaining songs, complaining about the hard times, and sometimes mistreatment of [sic] the whites. Have you got any songs that talk about that?

McTell: No, sir, I haven’t. Not at the present time because the white people’s mighty good to the Southern people, as far as I know.

Lomax: You don’t know any complaining songs at all?

Lomax: “Ain’t It Hard to Be a Nigger, Nigger,” do you know that one?

McTell: Well, no, it’s not altogether. It has reference to everybody. Country music and the souls of white folk 627

With the racial politics of the era, it becomes reasonable to ask if any of these recordings collected are authentic. In this interaction, it seems as though Lomax is looking for a concept of black music rather than what the specific musician had to offer. Even as a respected musicologist, I question what John Lomax specifically looked for in his collection as well.
This photo includes John Lomax and musician Richard Amerson, who went on to record other folk albums later on in his career. 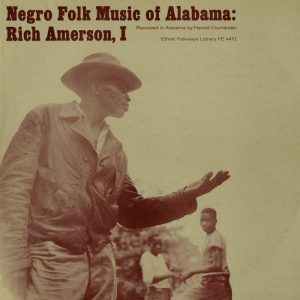 I continue to wrestle with the idea that record companies would advertise to different racial groups based on the race of the musicians. I wonder if this also become the case for Lomax and his collection based on the Monologues On Accident and photo. It feels as though while Lomax may be preserving a tradition through recordings, but also preserving problematic notions of race through his preconceived notions of what he wanted in his collection.