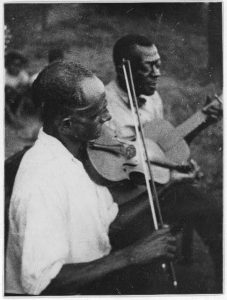 I was drawn to this photo because it was one of the few in the Lomax collection that depicted black musicians performing. The photo is titled “Stavin’ Chain playing guitar and singing the ballad “Batson” accompanied by a musician on violin, Lafayette, La,” although notes later on clarify that this titled was devised by library staff. The picture is from June of 1934 and is part of the Lomax collection of photographs depicting folk musicians, a collection that focused on the southern United States and the Bahamas.

The first question I had was what the ballad “Batson” sounded like.  While I eventually found the recording, in my search I also happened to come across a particularly helpful three part series of blog posts/essays (blessays??) by Library of Congress researcher Stephen Winick. Winick’s analysis is a wonderfully detailed, albeit lengthy.

“Batson” is a ballad about a string of murders committed by Albert Edwin Batson in Lake George, Louisiana, and his subsequent trial and execution and subsequent trial. Winick examines how ambiguity in the song allows listeners to come to their own conclusions regarding Batson’s innocence. He also compares the ballad presented by Stavin’ Chain (Wilson Jones) and lesser-known versions collected by Robert Winslow Gordon, John Lomax’s Library of Congress predecessor.

Winick categorizes this ballad as an example of African American string bands, which Rhiannon Giddens notes as an influence to the development of bluegrass. This photo supports her argument that black musicians were participating in many types of music generally assumed to be “white.” The photo dates from 1934, before “bluegrass” became its own genre but after the white-washing of country music began. Although perhaps obvious, it is valuable in its depiction that black musicians were engaging in the genre of string band ballads in the 1930s which ultimately helps modern musicians rewrite the notion that these genres do not exclusively “belong” to white musicians.