As we discovered in our readings last week, Edward MacDowell’s “Indian” Suite for Orchestra represents a point in American music history where composers felt obligated to present the Indian identity in their compositions.  This is often referred to as the “Indianist” movement inspired by Antonin Dvorak in his use of Native American and African-American thematic elements used in his prolific Symphony No. 9 “New World.” 1 However, we look back on it today as a example in a long line of misunderstood interpretations of the American Indian identity by primarily white people at the top of a hierarchy, whether it be at the helm of a government entity or a religious, social, or cultural sphere.  To drive the point home, here is an excerpt from an article written by Henry Finck as a tribute to Edward MacDowell’s legacy.  This particular excerpt was written in response to hearing the “Indian” Suite performed by the Boston Symphony Orchestra:

“The Indian suite played at this concert was interesting from many points of view, which I can touch on only very briefly.  It is based on genuine American Indian Melodies.  The introduction has almost a Wagner touch thematically, but it is note for note Indian, and there is also a curious Northern ring in some of the theme… we might say that the MacDowell suite is civilized Indian music.” 2

By presenting the notion that MacDowell refined American Indian songs to become more “civilized,” Finck asserts that American Indian music is something uncivilized or perhaps “savage.”  This perception of Native American culture by Americans was commonly accepted and was a longstanding notion in the use of programs sponsored by the United States government, with one of the many examples being the use of Indian Boarding Schools as a way of brainwashing American Indian children into becoming more “American.”

While the “Indianist” movement did portray a negative connotation of Native American music, it would later inspire other composers to counteract with their own take on how American Indian identity should be portrayed in classical music.  Take for example, “the father of Native American Composition,” Louis W. Ballard: 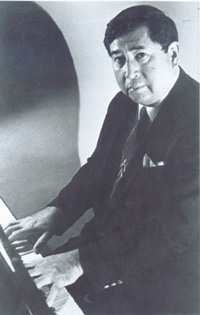 As a Quapaw Cherokee Indian, Ballard wanted to blend the styles of Western classical music with “the music and dance traditions of his culture.”  He studied with several different composers in the 1940s and 50s, such as Darius Milhaud, Mario Castelnuovo-Tedesco, Carlos Surinach, Felix Labunski, and Bela Rosza, meaning that he was very dedicated to the craft of composition in the style of Western classical music.  As a composer, he wrote several pieces of varying instrumentation from solo works like the one presented here by Italian pianist Emanuele Arciuli  (Louis Ballard: Four American Indian Piano Preludes, Emanuele Arciuli, piano,) to woodwind quintet pieces with Native American flute, ballets, symphonies, and even a chamber orchestra piece titled Incident at Wounded Knee, which was commissioned and performed by the Saint Paul Chamber Orchestra in 1974.  Alongside his compositions, he also served as the National Curriculum Specialist for the Bureau of Indian Affairs from 1968 to 1979 and wrote American Indian Music for the Classroom which served as a curriculum “for teachers who wanted to incorporate American Indian music in classroom instruction.” 3

With his contributions to American music, Louis Ballard and several other Native American composers provided their unique voice from the precedents set by composers like MacDowell and Dvorak to write “Indianist” works.  Even Ballard himself accredited Dvorak’s prediction as an inspiration to compose his music, saying that “‘…[he] was in good company when [he] took up [his] pen to express the sufferings of [his] people, their regeneration and hopes for a better future life…'”