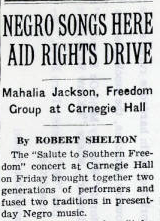 The Student Nonviolent Coordinating Committee (SNCC) gained national attention in 1960through staging sit-ins at Nashville lunch counters, igniting a sit-in movement across the country. They continued to lead the Movement in the Freedom Rides of 1961 as well as a number of other protests, marches, and voter drives across the South. In the midst of their protesting, SNCC members sang songs that reflected their passion for the cause, lifted their spirits, and stood as a symbol of resistance against segregationists.

SNCC protestors Bernice Johnson, Ruth Harris, Cordell Hull Reagan and Charles Neblett emerged from the Albany Movement in 1962 to form the Freedom Singers. This quartet of singers, all between the ages of 19 and 21, sought to draw attention to and raise money for SNCC’s fight for racial equality through performing the songs of the Movement. 1 The young singers captured the hearts of people across the country with their musical ability and passion for social change. Performing songs composed in jail cells, on the Freedom Rides, or in other protests,2 the Freedom Singers traveled thousands of miles and shared their music and message to audiences at over 100 concerts.

This newspaper clipping from the New York Times reviews the Freedom Singers’ performance at the esteemed Carnegie Hall in New York City. The Freedom Singers collaborated with renowned gospel singer Mahalia Jackson, but the reviewer Robert Shelton reveals, “There was perhaps even greater interest in the Freedom Singers and their songs, which echoed with the immediacy of today’s headlines, the integration battle in the South”. 3 Shelton goes on not only to praise the singers’ passion for their cause but their musical ability as well. He further commends their performance: “Even if the quartet were not dealing in matters so urgent as the topical freedom songs of the integration movement, it would be outstanding for its singing…. The Freedom Singers [are] in the top level of American folk groups” 4 Shelton’s review indicates that the Freedom Singers were successful in gaining the sympathies of audiences across the country through their passionate and impressive musical talent.

In many ways, the Freedom Singers resemble the Fisk Jubilee Singers. Both groups sing music intimately connected to the black culture of the past and their present. This is problematic in that they are performing for predominantly white audiences in order to raise money for their causes. Both groups experience the pressure of upholding something important at a young age: a newly founded black college and a student movement fighting for racial equality. Like the Jubilee Singers, the Freedom Singers’ commitment to their cause is admirable. They demonstrate how the power of music can bring people together in one common cause.