1865 was one of the biggest years in the history of the United States of America. The end of the American Civil War was fast approaching and the 13th amendment was ratified early that year. Celebrations, both public and private, erupted all over the country. With these celebrations came some historic national firsts. One particular first came in a religious celebration that took place in the Capitol soon after the completion of the 13th Amendment. Reverend Henry Highland Garnet was invited by The Chaplain of the House of Representatives, Reverend William H. Channing to speak and perform religious ceremonies to honor this historic moment. 1 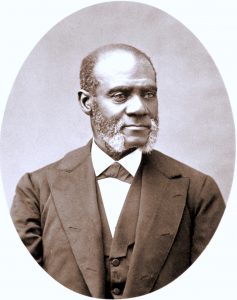 It was not only the first time that an African American preacher had performed a religious ceremony in the Capitol but, according to public letters, it was also the first time a black man had spoken there. 2 The significance of this event was not lost on Washington residents and both white and black men came to hear him speak. To further the momentous occasion congregants of the local black Methodist church, joined by a variety of members of nearby white churches, sang for the occasion. This interracial choir showcased both an ideological and political commitment to the expansion of rights for African Americans.

Article reflecting on Rev. Garnett’s appearance in the Capitol

Spirituals are such an integral part of the African American experience, in many cases they represent hope and strength in times of strife. 3 It’s fitting that they would be included in such a historically important moment. The combination of politics, religion, and music symbolize the progressive and creative changes happening in the United States at this time. This celebration is ultimately representative of how music and ceremony can provide an outlet for people to come together and represent the multi-faceted nature of change. This moment in time shows how music can help to bring people together and how it can provide a platform for the celebration of progress.

2 Garnet, Henry Highland. A memorial discourse: delivered in the hall of the House of Representatives. Philadelphia: J.M. Wilson, 1865.