After reading Eileen Southern and Dena Epstein’s accounts of American slave songs and particularly spirituals, my curiosity was piqued. I set out to see what sheet music for spirituals looked like from the days of the sheet music craze and naturally ran across something I wasn’t really expecting.

What I found was H. T. Burleigh’s arrangement of “Sometimes I feel like a motherless child” for low voice and piano.1 One thing that initially struck me about the song was that it fit with what Epstein wrote about as a common theme in slave songs, that is the repetition of the same line of text several times in a row. Another common characteristic was syncopation, which is also an important driving characteristic of this song.2 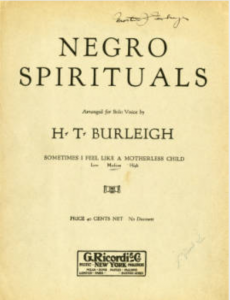 The cover of the sheet music for “Sometimes I feel like a motherless child”. A recording of this arrangement can be found here.

However, arrangement is also interesting because it has been written in the style of arias and art songs. The melody is written out clearly, omitting some of the vocalizations that perhaps would have been sung by slaves. It is also made clear that the song does not perhaps fully fit a European method of transcription by the footnote on the first page which offers an alternate rhythm for one of the measures. Additionally, the arrangement contains a simple piano accompaniment consisting mainly of repetitive chords on the beats. This makes sense as the arranger, H. T. Burleigh studied on scholarship at the National Conservatory of Music in New York and ultimately became famous for being the first to arrange spirituals in the style of art songs, allowing for their entry into recital repertoire.3

The other interesting aspect of this sheet music is the arranger’s note that precedes it. In it, Burleigh gives a brief history of spirituals and claims that they are “practically the only music in America which meets the scientific definition of Folk Song”. He then goes on to advise the would-be singer that “the voice is not nearly so important as the spirit” when preforming, and that rhythm is the critical element. He admonishes that spirituals should not be linked with “minstrel” songs and that one should not try to imitate “Negro” accent or mannerisms in performance.

Ultimately, this got me thinking again about our discussion question of who gets to sing these songs and who gets to decide who gets to sing them? This arrangement was obviously originally intended for a white audience because of its warning about trying to perform them imitating the ways that are “natural to the colored people”. Written as it is in the style of an art song, means it caters to recitalists. Most recitalists of the time were white, as Burleigh himself is regarded as one of the first African American recitalists. Can white performers sing these songs that came out of the deep anguish of slavery and do them justice? 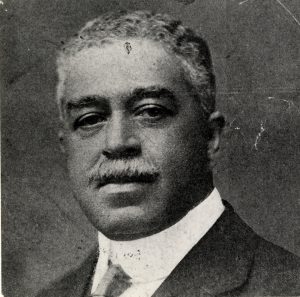 Burleigh also adds an interesting dimension to the puzzle. As a black man born after the abolition of slavery, does he still have a right and connection to these songs? After all, he came from a poor family and learned many of his spirituals from his grandfather, who had been a slave.4 Furthermore, Burleigh still lived in a time of deep racial inequality and probably experienced ugly racism and discrimination in his own life.

Perhaps Burleigh, in is own way, provides a bit of an answer to this quandary in his performance notes when he remarks that spirituals’ “worth is weakened unless they are done impressively, for through all these songs there breathes a hope, a faith in the ultimate justice and brotherhood of man”. It may not be a perfect answer, but it is something.