In the first chapter of his book, Love and Theft: Blackface Minstrelsy and the American Working Class, Eric Lott argues that although “cultural appropriation was the minstrel show’s central fact”, there may be more to the story than first meets the eye. Despite being blatantly racist and demeaning towards African Americans, Lott argues that minstrelsy potentially served more positive roles that are often overlooked.1 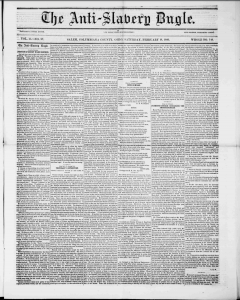 One example of Lott’s argument comes from a little article that appeared in a New-Lisbon, Ohio abolitionist paper, The Anti-Slavery Bugle, on February 18, 1860. The newspaper’s self-proclaimed role was to “sound the bugle-note of Freedom over the hills and through the valleys” and it therefore contained a mixture of news about the anti-slavery movement, opinion pieces, essays, and stories like this one.2 Perhaps unsurprisingly, the article bears the dramatic title “A Negro Minstrel Sold into Slavery” and recounts a trial that took place in Galveston, Texas.3 Both the events that unfold in the story and they way that they are described suggest that perhaps minstrelsy and its music could provide a means by which a black man might gain better opportunities in the Antebellum South.

Ultimately the story tells of an affidavit and the subsequent rulings pertaining to “a free negro” who came to town, “calling himself Joseph Vincent Suarez, and passing himself for a white man”. This plays into another point of Lott’s, the idea that many Americans did not really know whether the minstrels entertaining them were black or white. In fact, the article describes that for the trial to commence, multiple doctors were called upon verify that Suarez was, indeed, a person of color. Suarez was therefore able to effectively blur the color line because his race was not immediately apparent.

Additionally, it is probably a fair assumption to say that Suarez’s minstrel act afforded him a better opportunity than would have otherwise been available. Suarez was able to capitalize on a popular form of music at the time and therefore advance himself economically and potentially socially.4

A caricature of a blackface minstrel performer around 1850-1860.

Furthermore, it is important to discuss Suarez’s punishment. While it is undoubtedly strict to modern readers, it is not as dramatic as the article’s headline makes it out to be and not as severe as what punishments could be for black men in the slave-holding South. Suarez was sentenced to be hired out for labor for six months, the profits from which were to go to his expenses during the time and then to his departure from Texas at the end of the term. What also bears consideration is the last line of the article: “It is proper to remark that this Suarez came to this city as a negro minstrel, and he has, therefore, the merit of passing himself off in his professional character for precisely what he is”. Again, Suarez’s minstrel profession furnishes him with benefits he might not otherwise gain. In this case, an excuse for a lower sentence.

Minstrelsy is certainly one of American history’s more embarrassing artifacts. But, as Lott discusses, perhaps even this very negative aspect of the popular culture provided some individuals with positive opportunities. If nothing else, like other forms of American music, minstrelsy helped in some places to blur the color line and throw into question the notion of separate racial cultures.