During the 1930s, amidst the Great Depression and the American modernist movement, works by two of the most well-recognized American composers were performed in the same place in the same weekend. The First Festival of Contemporary American Music, held at the Yaddo estate in Saratoga Springs, NY featured a weekend of music programmed largely by Aaron Copland. Included in the Sunday afternoon concert were seven pieces from Charles Ives’ “114 Songs.”1 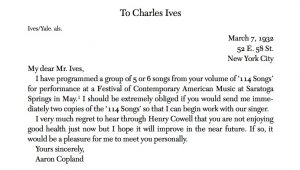 In this letter included in The Selected Correspondence of Aaron Copland, Copland writes to Ives to gain approval to perform these works as part of the festival and to obtain scores to begin work. Although Copland does not overtly mention why he has chosen to include Ives’ pieces in the festival, the editors propose that Copland included Ives’ pieces to provide historical background for the more contemporary pieces on the program.2

Ives’ art songs performed at Yaddo, a few of which are included here, marked a turning point in his reception among critics. Critic Paul Rosenfield wrote of sensing “the presence of a first-rate composer of Lieder in the ranks of American Music.”3 The festival, while giving voice to numerous contemporary composers of the time, also served as a chance for Copland to moderate a forum between critics and young composers, greatly benefiting the reputation of Ives’ compositions while simultaneously making Copland out to be exceedingly disapproving of the way journalists impacted contemporary music.4

Although Copland’s preferences for simple, easy-to-understand music which we discussed in class last week seemed in conflict with Ives’ ultra-modernist “push-the-envelope” styles, it’s enlightening to see that parts of both composers came together successfully in the Yaddo Festival. While there are many things that set these composers apart, it still is important to note that they were able to appreciate one another for the contributions they were making in a period of economic turmoil and financial hardship for a majority of the United States.