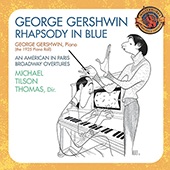 One of the most notable compositions that comes to mind when ruminating on symphonicjazz is Gershwin’s “Rhapsody in Blue” (1924). Listen Here. In thanks largely to Paul Whiteman’s clever marketing as an “Experiment in Modern Music” and its premiere performance in a well-known venue, the Aeolian Hall, the piece was largely well-received by audiences and critics.1 Much of the praise for Gershwin’s work was that it encompassed what American’s wanted out of distinctly “American Music.” As Crawford points out, it encompassed three strands of development: blues as popular music, the spread of instrumental jazz, and a want for modernism in the classical sphere.2

As we’ve discussed in class, the perception of Gershwin’s music as uniquely American can be troublesome because to some it seeks to exploit and adjust music of cultures aside from Gershwin’s own for the profit of symphonic tastes. As Crawford also points out, it was certainly not the first to present black dance music or jazz in concert settings although many think it to be so simply because the previous works by composers like Will Marion Cook or W.C. Handy are less well known simply because of their minority in that era’s society.3

A story that’s less-often told is that some people really did not enjoy “Rhapsody in Blue” or jazz elements in general. When exploring writings on jazz, I came across an article from our very own campus paper, The Manitou Messenger. Interestingly, an article from 1933, nine years after the premiere of “Rhapsody in Blue,” conveyed stern opposition to jazz band at St. Olaf saying “jazz is profanity in music.”4

“Many…students who aspire to and cherish the higher things in life despise this type of music.”5

Is this negative reception of jazz a sign of the times at St. Olaf in the 1930s? It seems pretty forthright, which at first lead me to think there was room for anti-jazz, conservative thinking on campus at the time. However, in the publication later that month, another student wrote an opinion article which countered that the former article “was of very little consequence” and “hardly worthy of a serious reply.”6 This author claimed that this jazz band nay-sayer was fueling the fire that the college was attempting to paint itself as heavily religious.

“Why be afraid to admit St. Olaf is not a monastery?”7

Interestingly, both authors simply signed their articles with their first initial leaving some room for anonymity. Although we don’t know who these students sharing their opinions were, what they were studying, or where they are now, we do know that responses to jazz were not all in loving favor.