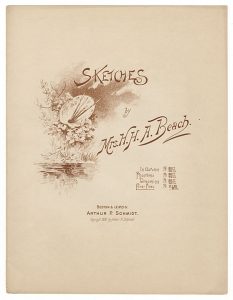 The cover for Amy Beach’s 4 Sketches, Op. 15, from the Americana Sheet Music Collection

It is without question that Amy Beach was among the early influential American composers, with a decorated career of both composition and performance. Her career took place during the late 19th century and the first half of the 20th, which was prime time for white male hegemony, yet Beach still found great success. She was privileged to have taken music lessons and married young, which in turn allowed her to hone in on her compositional and piano performance skills. With the death of her much older husband in 1911, Beach was able to go abroad to Europe for a performance tour, returning to the States in 1914 because of World War I. This did not stop her from performing though, since she took on a cross-country tour of the United States. Beach often took her performance opportunities to play her own pieces, which is clearly shown with her extensive piano repertoire. Featured below is a the fourth sketch titled Fireflies, from her 4 Sketches, Op. 15.

A 1915 opinions article by the Morning Oregonian defends not only Beach’s piano skills, but her compositional feats as well. Discussing how major composers of the time such as Claude Debussy or Hugo Wolf didn’t write a single symphony like Beach did, the author claimed that hers was one that demanded the highest respect. Despite sexism of the time, Beach was still regarded as a great composer, but why don’t we hear about her music anymore?

In September 2017, the New York Times honored Amy Beach’s 150th birthday with an article on her life and works. The biggest takeaway I found in this article was that her “Gaelic” Symphony shot her to compositional fame, but no orchestras have programmed hersymphony or any of her orchestral works for this season. While Beach experienced sexism at the height of her career, it is clear that sexism in classical music is still alive and well when none of our major orchestras will honor her works on this anniversary.