Amy Beach was one of the most influential composers on American music during her life. Her grand works like the Mass in E-flat and the Gaelic Symphony made her stand out amongst composers in a newly emerging American classical scene. Beach also wrote many songs for piano and voice and one in particular that I would like to highlight is With Violets, Beach’s first official work.

With Violets was published in 1885 and the text comes from the poet Kate Vannah, and is presented in an original setting by Beach. Not much scholarship exists on Beach’s first work, in fact I was unable to find any recording of With Violets. I find this a little surprising, as With Violets captures elements of Beach’s compositional style that stayed consistent throughout her life. 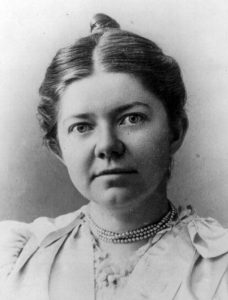 Amy Beach, composer of “With Violets” 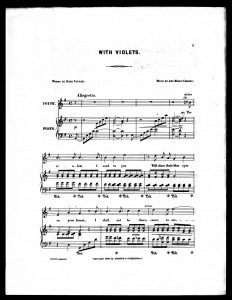 The first page of “With Violets”

In 1943, Beach commented on her creative process and composition in general by comparing it to poetry. In her words, a poet is “stirred by a vigorous emotional impulse” then “reflects more calmly upon this emotion” and finally “seeks to clothe the combination of emotions plus thought with the most beautiful and suitable words, meters, and rhymes.” She goes on to say that “that, in the most general way, approximates the stages in musical creation, as well.” As you read the text to With Violets (no recording exists as of yet), try conjuring up music in your head.

The violets I send to you
Will close their blue eyes on your breast;
I shall not be there, sweet, to see,
Yet do I know my flowers will rest
Within that chaste, white nest.

O little flowers, she’ll welcome you
So tenderly, so warmly!
Go, I know where you will die tonight.
But you can never, never know
The bliss of dying so.
If you could speak!

Yet she will know
What made your faces wet,
Although I fain would follow you, and tell.
There, go and die, yet never know
To what a heav’n you go.

Beach describes a very similar experience to the one you might’ve just had when she was composing her setting of Canticle of the Sun. In her words,

“The text called melodies to my mind. I went out at once under a tree, and the text took possession of me. As if from dictation, I jotted down the notes of my ‘Canticle’.”

I think it’s a stretch to say that every piece composed by Beach had this sort of musical epiphany, but the intentionality of her composition can’t be denied. For her first published work to be a setting of a poem says a lot about the artistry she saw in her compositions. Her songs exude many of the same feelings that poetry does, and I would argue that point as a major reason for her musical success.