In Edward MacDowell’s “New England Idyls,” he combines classical European harmonic elements with titles and epigraphs that evoke a purely American setting.  The resulting character pieces are incredibly descriptive and strive towards an American musical national style equivalent to the Russian style created by Mussorgsky and the Polish style created by Chopin. 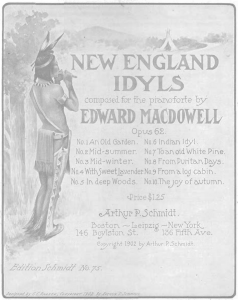 the original art featured on the cover of “New England Idyls”

European harmonic idioms of the 19th century are very prominent in “New England Idyls.”  The third piece in the set, entitled “Mid-Winter,”is particularly rich in Romantic German- and French-sounding harmonies.  Throughout the movement there is intense chromatic saturation, typical of Wagner and Strauss.  Also reminiscent of these composers is the harmonic shifts by third instead of by fourth and fifth, which MacDowell employs to very dramatic effect.  MacDowell also writes colorful non-functional harmonies that are reminiscent of Debussy (of whom MacDowell was an almost perfect contemporary). 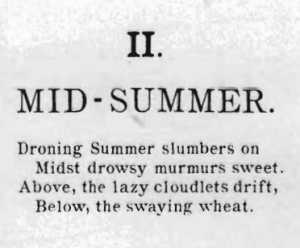 one example of MacDowell’s epigrap

Complementing his Romantic harmonies are MacDowell’s epigraphs. Similar to the titles of Debussy’s piano preludes, these short snippets of text frame the colorful, descriptive music, lending a sort of program to each piece.  Unlike Debussy’s brief and cryptic inscriptions, however, MacDowell’s texts are substantial and highly specific, evoking images of the New Hampshire countryside.  Most of the movements describe natural features such as An Old Garden, In Deep Woods, To An Old Pine.  Two others describe other facets of the American experience: Native American culture is represented (for better or for worse) in Indian Idyl, and a facet of white America’s religious history is portrayed in From Puritan Days.

As we have seen, MacDowell strives to create an American classical music by adopting a European musical style and imbuing it with American textual imagery from his own personal experiences in New Hampshire.  Whether or not he succeeds in this endeavor is up to the listener to decide.