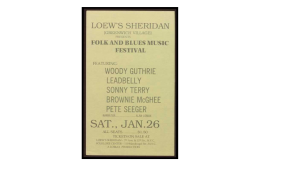 The artifact I found was a poster advertising for a folk and blues music festival that took place on January 26th of 1952. This happened during what we now refer to as the American folk music revival. The festival took place at a concert hall called Loew’s Sheridan, located in Greenwich Village in New York City. The location of this event is significant. Many artists central to the Beat Generation, an important American literary movement, lived in Greenwich Village in the 50s and 60s. As the Beat movement expanded, other counter cultural movements, such as Hippies, adopted similar mentalities. Greenwich Village later became a major hub for folk musicians during the 60s, where many major acts got started in the music club scene. Fun Fact: The Greenwich Village folk music scene in the 60s is the primary subject of the Cohen Brother’s film, Inside Llewyn Davis.

“The evolution of rhythm and blues into rock and roll as a high art form, as evidenced by the Beatles, Bob Dylan, and other popular musicians influenced in the late fifties and sixties by Beat generation poets’ and writers’ works,” shows the Beat Movement’s pervasive effect on Western culture.    ~Allen Ginsberg 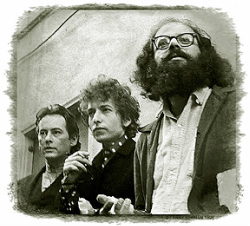 The festival contained an unbelievable lineup, containing some of the most important musicians to the folk revival movement. Included were Woody Guthrie, Leadbelly, Pete Seeger, Sonny Terry, and Brownie McGhee.

This festival was organized by our familiar friend, Alan Lomax. The festival also featured narration by Alan Lomax, probably to provide context for these performances. It is often stated that without Lomax, we would have no knowledge of acts from this lineup. Lomax is credited for discovering such musicians giving them opportunities for performances to reach a larger audience, such as this one. One man who saw the importance of Alan Lomax, Bob Dylan, had this to say about him:

“There is a distinguished gentlemen here who came … I want to introduce him – named Alan Lomax. I don’t know if many of you have heard of him [Audience applause.] Yes, he’s here, he’s made a trip out to see me. I used to know him years ago. I learned a lot there and Alan … Alan was one of those who unlocked the secrets of this kind of music. So if we’ve got anybody to thank, it’s Alan. Thanks, Alan.”       ~Bob Dylan