After The Songs of Hiawatha was “dropped” in the 1850’s, there was a general divide in the act of preserving, viewing, and conceiving the Native American-European settler dynamic in the late 1800’s: one that was rooted in trivializing various tribes, and one that focused on a scientific interest in Native American culture. While notable musicologists, such as Alice Fletcher, focused on the latter of the divided cultural conquests, American bison hunter/showman William F. Cody, a.k.a. Buffalo Bill, led the charge on the belittlement side of the coin with his “Buffalo Bill’s Wild West” variety show. With a bison-hunting career that quickly turned into a celebrated and brief scouting stint with the Fifth Army, Cody was slowly transformed into the star-studded cowboy he is considered today through various “vaudeville-esque” shows, inexpensive pulp-fiction magazines, and investments in hotels, mines, coal and forms of tourism. 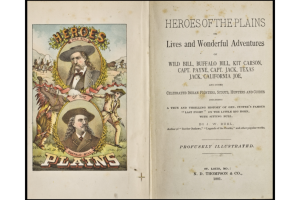 Although Cody was known as a strong supporter of the “fair” treatment of Native Americans, his entire career was based off of creating a romanticized, Western-based reality that exploited countless stereotypes. This notion can find it’s needed support in the study of Cody’s entire career as a sell out, cowboy performer, but I, in an attempt to showcase the extremity of trivialization, will prove my point with the cover page of an 1881 Wild Bill dime novel entitled: “Heroes of the Plains.” One of the first details to take note of is in the front-piece title page, where a descriptive list of the characters is given. Listed in bold and bright text towards the top of the page is a list of seven white, heroic character names, while the only mention of the “celebrated Indian fighters” is found in much smaller text below in the “and other” category of characters. Cody, while exploiting his respect for the Native American community by referring to their characters as “celebrated,” also is clearly portraying the white, American cowboys as the heroes of the story, giving the Native Americans the stereotypical role of the villains. 19th century Americans east of the Mississippi lacked the cross-cultural contact between Native Americans and Europeans, and it was through these trivial, typecast “Buffalo Bill” adventure stories that they developed a misconstrued conceptual framework of the various tribes and cultures. This “heroes vs. villains” theme can also be seen through the artwork displayed on the cover page. While the two stars of the story, Wild Bill and Buffalo Bill, are presented in ornate, golden frames, the only Native American shown clearly is brandishing a threatening dagger towards a hunched over, white settler, defending himself from an attack. In a devastatingly bloody history of white men conquering, conforming, and destroying Indian tribes, it’s hard to imagine a Native American as a “savage foe,” but in a culture built upon shows such as Cody’s, it is still, to this day, a reality.

Bruel, James. 1881. Wild Bill and Buffalo Bill. Heroes of the plains, or, lives and wonderful adventures of Wild Bill, Buffalo Bill… and other celebrated Indianfighters.” http://www.americanwest.amdigital.co.uk/Documents/Details/Graff_467