In Charles Wakefield Cadman’s 1909 work, “Four American Indian Songs,” he attempts to create a “purely American” music by setting original Native American melodies, as transcribed by Alice Fletcher, in a traditional Western harmonic idiom.  This musical effort, sometimes described as “Indianism,” may appear at first to be a laudable one.  By adding English words and Western harmonies, Cadman ensures that these Native American melodies will be heard by a wide variety of people.  If he could bring these Native American folk melodies into the mainstream of American song, they could be preserved and celebrated for years to come. 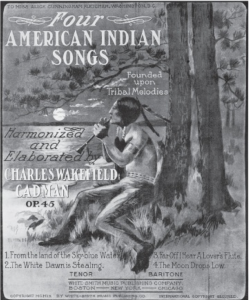 Artwork from the First Edition of “Four American Indian Songs”

Surely enough, Cadman purports to have a certain amount of respect for Native American culture, and his methods do strive for a sort of “authenticity.”  In his article “The ‘Idealization’ of Indian Music,” Cadman cites the importance of understanding the Native cultures that he borrows from.  He recommends that an Indianist composer should learn about Native American legends and rituals, attend powwows, and even spend time living on a Reservation if possible, before attempting “idealize” (read: Westernize) Native music.

Despite his lofty aspirations of sympathy and understanding, however, Cadman ultimately falls short of the mark.  Throughout his article, he consistently describes Native American people as “primitive,” and makes the claim that “only one-fifth of all Indian thematic material is valuable in the hands of a composer.”  Cadman does not view Native American musical traditions as inherently valuable and worthy of study, but rather as a quarry of raw materials that he can mine for his own profit.  His musical project, which initially appeared to be a beautiful marriage of two disparate traditions, instead smacks of exploitation and imperialism. . . is it possible, then, that perhaps he has succeeded in writing “purely American” music after all?