I don’t know about you, but I find it so fascinating how there have been many women involved in the evolution of the blues/jazz. I mean usually we study the history of different genres of music and it is mostly men who have participated in the crafting of music. I would say that that is not the case for the blues or jazz. I mean think about it, when you drop the names Mamie Smith, Bessie Smith, Billy Holiday, Sarah Vaughn and Ella Fitzgerald… I immediately think of them as equivalent to all of the well-known male blues/jazz musicians. I am sure others do as well.

Taking a step back in time Bessie Smith (1894-1937) was one of the early blues vocalist who had a successful career. She traveled around the states performing blues creating a name for herself. She was called the ‘Empress of the Blues’ (Evans). When reading the article “Bessie Smith’s ‘Back-Water Blues’: the story behind the song” it was powerful to read how the song “Back-Water Blues” composed by her, made such an impact on the society around her. In this article, it spends a lot of time talking about how the text of this song relates to the Mississippi River flood. This flood impacted many black americans when it happened, but there is much irony in the fact that the song was composed and recorded before the flood actually happened (Evans).It is heart-warming to know that her artistry of composing and preforming allowed for other women to have similar experiences, especially women of color.

I found this poem called “Bessie Smith” by Sybil Kein. 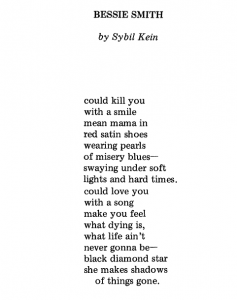 I think this is such an interesting poem because it encompasses all that Bessie Smith conveyed through her performances of the Blues.