Fermentation for the Future of Farming

Much to my delight, our time in Japan has revealed to me that the Japanese diet includes a wide variety of fermented foods. Miso and soy sauce are two staples of Japanese cuisine that are both comprised of various forms of fermented soy. Walking down the streets of Tokyo we saw bucket after bucket of vegetables and assorted foods left out to sit and maturate in their respective juices. Through the process of fermentation, food is allowed to cultivate its own colony of bacteria. These bacteria, in many cultures and households may be seen as unwanted pests, but through a proper fermentation process, “good” bacteria can form. “Good” bacteria supports and lives in symbiosis with the bacteria already inhabiting our bodies. In a world that is overwhelmed by unnecessary antibiotics, it is becoming even more crucial that we pay close attention to our own bodily ecosystems. 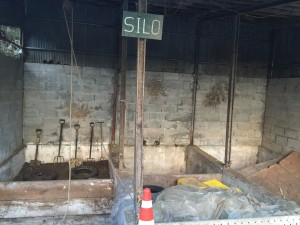 Here at ARI, however, the process of fermentation has carried over into the agricultural aspects of this intentional alternative community. The first innovative use of fermentation is in the case of their livestock feeds. I came across this new idea during our morning food life work on our second day on the farm. My group was assigned to the livestock section of work, but having entered the country less than a week ago we were still under quarantine and, sadly, could not come in direct contact with the animals themselves. As an alternative, we were told to go to the silo to fill barrels with feed for later use. As students from the Midwest, the structure that we happened upon would not necessarily classify as a silo based on the large cylinders we often see dotting the Minnesotan countryside. Instead we found ourselves standing in front of six very large concrete pits, each with their contents covered with plastic, dirt and tires. We were instructed to jump in and uncover the hidden treasure that lay below the plastic covering. Once uncovered the distinct smell of pickles wafted out in an overwhelming plume. Personally, I found the smell of fermented corn to be a comforting reminder of making pickles with my mom and Grandmother, though the rest of my group did not concur. Corn grown on the ARI land is harvested and piled into these large “silos”, covered and left to ferment for, based on the smell, at least a matter of months. This feed, as compared to that which they imported up until a number of years ago, not only has the perks of being locally grown, but it also contains countless colonies of bacteria. Chicken and pig bodies, working in a similar manner to humans, are given a boost by the cultivated microbes. This bacterial supplement enhances health and disease resistance in their livestock, decreasing the probability of illness, and basically eliminating the need for any chemical, medical supplementation. The products are happy, healthy chickens and pigs that provide food for happy, healthy people. 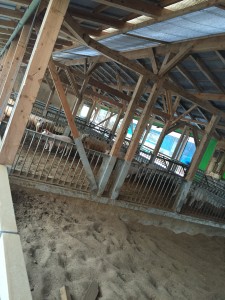 Fermented floor at use in the pig pen

The second innovative use of fermentation also resides in the realm of livestock on the ARI farm. I don’t know if everyone has had the pleasure of walking into a conventional pig barn, but I have. Growing up in Iowa, I swear the entire state becomes one big pig barn in the summers when the noxious fumes of pig farming saturate the air statewide. Needless to say it is not the most pleasant of smells. The relatively impermeable concrete floors used in industrial pork production that allow pig excrement to sit and fester cause the smell. Not only, does this produce an unpleasant odor, but it also carries more risk for disease. ARI, the melting pot for global knowledge that it is, has again found a way to combat the problem. ARI uses fermented floors in their pigpens. Instead of laying a concrete foundation, they leave the floors unlined. The soil is mixed with rice husk, which create an ideal host structure for bacterial colonies. The endemic bacterial colonies are allowed to flourish and in the process promote the growth of other microbes and decomposing microorganisms that digest the pig waste. The pigs themselves do a portion of the work too by turning the equivalent of a large compost pile that they live on with their walking, rolling around on the ground, and rooting around in the soil. Again, by exposing their pigs to an environment saturated with “good” bacteria, ARI is decreasing the risk of disease in their livestock.

The third method in which ARI utilizes fermentation is through the use of fermented fertilizer. ARI has a dedication to the practice of organic farming. This alternative method refuses the use of chemical fertilizers. As chemical fertilizers lend a certain matter of ease to the practice of farming, ARI has had to discover an equally effective method of fertilization that adheres to their values. ARI uses rice husks from a nearby sake manufacturer mixed with food scraps, scoops of fermented floors from the chicken and pig pens, and weeds from their own land, to convert into a fermented microbial supplement for their agricultural soil. This makes the soils not only more nutrient rich but also lends a boost of indigenous microorganisms.

The United States is only just coming to understand the importance of bacteria. Since the dawn of medical antibiotic use, antibiotics have become ubiquitous in our food and water. As permeable bodies, we are susceptible to the potentially catastrophic side effects of overuse and ubiquity. Bacteria are essential to our functioning as human bodies. It is crucial that we do all we can to support their health. The innovative uses of fermentation on the ARI farm should serve as a template for farmers (organic and conventional) to minimize the inputs of harmful antibiotics into our global ecosystem.