Earlier this morning, our combined groups had the opportunity to lead a chapel service back home at Saint Olaf College. Here’s a link to the archived service if you’re interested: https://www.stolaf.edu/multimedia/play/?c=2563 (our individual talks are also written out below).

Special thanks to Hikari for organizing our team on this!

Marianne: 22 Let us draw near to God with a sincere heart and with the full assurance that faith brings, having our hearts sprinkled to cleanse us from a guilty conscience and having our bodies washed with pure water. 23 Let us hold unswervingly to the hope we profess, for he who promised is faithful. 24 And let us consider how we may spur one another on toward love and good deeds, 25 not giving up meeting together, as some are in the habit of doing, but encouraging one another—and all the more as you see the Day approaching.
(Hebrews 10:22-25)

Sophia P: Welcome. We are members of two interim trips who spent the majority of January immersed in a beautiful community set in rural Tochigi Prefecture, Japan. The two classes were both centered at the Asian Rural Institute. Professor Tegtmeyer Pak’s course was a joint Asian Studies and Environmental Studies class where we looked at the history of environmentalism in Japan and the ways in which projects around Japan can serve as a model for increased environmentalism in the United States. The students who studied under Professor Paul Jackson conducted directed undergraduate research projects on lingering radiation on ARI land and bokashi – a fermented fertilized made from locally sourced ingredients. All thirty one St. Olaf members were welcomed wholeheartedly into ARI life. Our theme for Chapel today is community – especially the ways in which we saw community manifested during our time in Japan.

Community. It is a central part of our lives at St. Olaf and a central part of life at the Asian Rural Institute. The Asian Rural Institute is an organic agriculture training center for rural leaders from all over the world. The ARI curriculum is centered on revitalizing rural localities through community involvement and joint action. People of vastly different religions, native languages, professions and traditions come together for a nine month training program. This nine month long educational program reminds me of another academic institution set on a hill above agricultural fields. Our own campus is made up of individuals on all walks of life coming together to learn. Beyond having similar settings, ARI and St. Olaf College both provide meaningful communities through which members grow closer to each other and closer to spiritual truth.

The mission of the Asian Rural Institute is to build an environmentally healthy, just and peaceful world, in which each person can live to his or her fullest potential. This mission is rooted in the love of Jesus Christ.

The ARI mission brings into focus the notion of maximizing human potential as rooted in the Love of Jesus. Although a Christian organization, ARI invites members of all spiritual traditions to join them. From episcopalians, to muslims, to hindus, to buddhists, to agnostics and to those whom faith does not play a major role in their lives, ARI welcomes people for who they are and views everyone as children of God. For me, I saw the love of God shining through all ARI community members and all St. Olaf members regardless of their own personal faith.

The mission of St. Olaf college is to provide an education committed to the liberal arts, rooted in the Christian Gospel, and incorporating a global perspective.

We see a commitment to liberal arts through courses and general education requirements forcing students out of their comfort zones in order to gain a more holistic set of lenses with which to view the world. A strong lutheran heritage and ties to the ELCA create an environment where all members can explore and discuss the role of God and spirituality in their lives. To find global perspective, all one needs to do is look at the flags lining the walls of this very chapel.

Living at ARI for a month allowed me to explore the role of faith and community in my life. I came to the realization that just as ARI is an intentional community, so is St. Olaf College. We are a community of students and of professors, of teachers, and of learners. We may have different dreams and aspirations, but we are all a part of this community. Everyone has a role to play in this community, just as everyone has a role to play at ARI. We all must work together in community so that we may live together in greater harmony with ourselves and with God’s Creation.

B: Our journey through Japan was an intentional blend of exposure to the devastating effects of humans on the natural environment and working in an intentional community that recognizes the natural landscape that envelops them as the epicenter of life.  I’m not going to lie, it was emotionally draining, being battered by the devastation caused by humans in the cases of the Ashio copper mine and Fukushima-Daichii disaster, and then rejuvenated by the rich care and respect given to the land on the ARI farm. The intense juxtaposition of relationships with the landscape was staggering.

It became easy to be overwhelmed by the suffering of the land and people represented in the scarred earth on which we walked. But we had to see the lowest of the low, the worst of the worst in order to fully appreciate the beautiful relationship with the land that the ARI community had fostered. At “The republic of ARI” life revolves around a relationship of mutual respect with the land, through which both parties are nourished and sustained.

In a conversation I had with a member of the ARI community, we discussed what makes the Asian Rural Institute a model for all communities of how we as humans can interact with the Earth. He explained to me how he views the relationship between humans and the land as a marriage. Both humans and the land  spouses who deserve love, care and respect. If one spouse disregards the needs of the other, the relationship can become toxic and no longer functional. It is through a strong relationship grounded in respect, love, stewardship, and care that we may reciprocally receive the same.

The task may seem daunting, in a society where it seems like every time we turn on the news there is a new story about some human marring of the Earth. But it couldn’t be more simple. Respect. If we can find the strength and energy to respect the dignity and value of the earth, we can begin the healing process and rebuilding of our seemingly broken relationship.

When I asked the same staff member what advice he had for young people working to mend this broken relationship, he told me to think about the work “impossible”. He told me that one day a voice came to him, and told him to put an apostrophe between the I and the M: I’m possible. With a little dedication and energy, anything is possible.

Corey: One of the most striking aspects of our month at ARI was the degree of connectivity, both with the food that we grew and the people that we ate that food with. While living on a farm in rural Japan, it would have been difficult to not grow close, but there was an intentionality in everything that we did, from starting every morning outside as a group doing our daily stretches to a chapel service led each day by a different person, to working with our hands in the fields, the soybean sorting room, and the kitchen. The result of this time spent together doing meaningful work is a loving, vibrant community where the highs and lows of individuals are felt by all.

As short-term participants at ARI, we got the chance to experience some of these highs and lows as well. Unquestionably, one of the highlights of the trip was a wedding that took place on the farm while we were there. The main gathering area where we ate together and spent our evening free time was transformed into this beautiful wedding venue by hanging white bed sheets over the windows and draping handmade decorations across the ceiling. Our group got to pitch in and baked wedding cakes and folded origami centerpieces for the tables and in general were swept up and invited to participate in the making of this really exciting celebration, even though most of us had just met the couple about a week or two prior. Though we were only temporary residents, we were never treated as anything less than family and got to experience some of the real joys of living in a community.

During our month in Japan, we also were faced with the aftermath of an unimaginable tragedy. The Fukushima Daiichi nuclear disaster of March 11th, 2011 forever changed the Japanese landscape. Even after the radiation naturally decays away and the area affected by the tsunami is rebuilt and repopulated, the fear and the sorrow from this accident will remain in the collective consciousness of the Japanese population for generations to come. The only way to recover from and thrive despite such a disaster is to come together as a community. We witnessed so many examples of this, from a women’s group in Iitate dedicated to showcasing the safety of Fukushima food products and preserving their cultural heritage, to groups of volunteers who scour the coastline and continue to reunite families with lost items five years after the tsunami, to two of many radiation testing centers that work to educate their communities while restoring a sense of agency and confidence. One of these testing centers is housed at and funded by ARI, known as the ARI Becquerel Center. The Becquerel Center serves the entire surrounding community, testing crop and water samples in addition to school lunches for unsafe levels of radiation. The formation of this center is part of a larger community response to the Fukushima disaster, and is the product of the local population deciding to stand together and take action for themselves, rather than living in fear of the unknown on the very land that sustains them. This is the flipside of community. While celebrations are inclusive and more joyful because of the people you share it with, the bonds of community also provide resilience in the face of hard times and make it possible to survive in what often seems like an unforgiving world.

Since we’ve been back on campus, our entire group has become more aware of the bonds that inextricably tie us together. This awareness has translated into an appreciation and a questioning of the food we eat in the caf. I for one have taken many more walks in the natural lands than I used to and spend more time appreciating the friendships I have. Maybe it hasn’t come about by hours spent chopping wood together or bonding over freezing fingers after picking carrots all morning, but we have an amazing community here at Saint Olaf. Not only does this mean that our high points as individuals are elevated even higher, but it also means that we need to be conscious of our environment and the people around us, so that we can come together and provide support in difficult times. 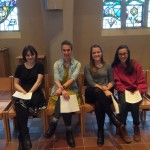 Our four speakers before chapel today