When I initially arrived in Japan in early January, I was not aware of much regarding Japan and its environmental history or what being there would actually be like. With Tokyo serving as my introduction, I knew that the rest of the course would do much to show me the stark contrast in environments present within Japan. I was surprised to see how rapidly the landscape changes within only a few minutes while riding the Shinkansen. Although a large part of this is due to its speed, I still find it bizarre that I spent a large part of one day in the heart of Tokyo but was back at ARI in just less than two hours.

Even after arriving back in the United States, I still think of the spaces, time, and distances in Japan and how they compare to other places I am familiar with. Observing both natural and man-made spaces was one of my favorite things to do because it tells so much about how the geography and other factors shaped the way in which people interact with their environment. Having gotten a new camera a few days prior to the trip, I decided to put it to good use and photograph the places and things that I found most interesting.

Though I had vague ideas of what I was likely to see in Japan, I had never given much thought to its specific relationship with its environment and how that has changed over time. That is what makes looking back at those photos more interesting. Many of them are of them are of Tokyo and its many colors and lights while others are of smaller towns we visited and their scenic natural surroundings. Looking back at those first pictures I took I can see more value to them because I can use the knowledge I gained during the course to look at it in different ways. The pictures I included are of Shibuya and a town that I saw on the way to Ito, a small town on the Izu peninsula. 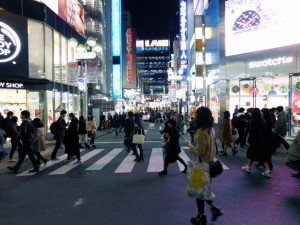 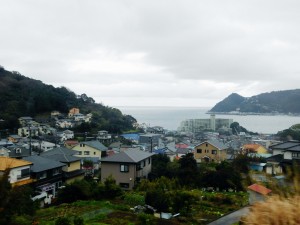 After the class and particularly writing and thinking so much abouthuman relationships with nature I can look at the greenery of the Izu photo and it becomes easy to see a direct relationship with nature. Many homes had their own gardens and all the towns were located between steep hills and the ocean. In the Shibuya picture this is not as apparent as there is no visible “natural scenery”. Although I found the near total lack of greenery and dense urbanization of Tokyo to be impressive and appealing in its own way, it brings up thoughts of the complex and sometimes negative relationship that Japan has had with the environment in order to achieve the type if development that is visible here. I believe that looking at an environment such as Tokyo only makes this more apparent but evidence of this can be found in nearly all types of environments in Japan, such as developments in more rural areas relating to manufacturing and energy production.