Though it’s a bit late in the month for introductions, there are seven Saint Olaf students who have been silent on this blog. We are the members of the 396 Environmental Research in Asia course, led by the fearless Paul Jackson, and have spent our time at ARI developing individual research projects. For the first half of our month in Japan, the seven of us spent time getting to know how ARI functions and narrowing down potential research themes. Two groups emerged from this process, with Nate, Jordan, and I focusing on radiation in forest ecosystems and Alex, Gabe, Peter, and Terese performing lifecycle analyses of ARI, some of which are centered on alternative bokashi formulas. The day before we left for Nagano Prefecture (which you can read all about on Dani’s post), we pitched our project ideas to the rest of the class, solidifying our individual research foci. We’ve been working on our projects since we returned to ARI and presented our results to an audience of staff members and other Saint Olaf students earlier this afternoon.

Team Bokashi’s presentation started off with Alex explaining the process of making bokashi, which is a specific blend of fermented organic matter produced by ARI for fertilizing crops. While ARI currently relies heavily upon rice products such as rice bran and rice husk charcoal to make their bokashi, this makes the practice difficult to transfer to rural areas outside of Asia where rice may not be a staple. Alex and the rest of the Bokashi Team experimented with substituting ground wheat for rice bran and monitored the temperature of three piles (regular rice bran bokashi, ground wheat bokashi, and a 50:50 hybrid mixture) using thermochrons to test the effectiveness of each substitution. Gabe’s project was closely tied to this and looked at the indigenous microorganisms (IMOs) present in each pile, finding differences in community compositions. While the fact that we’re doing low-tech research limited the ability to identify these IMOs, he was able to capture several images on the small microscope that we brought from Minnesota, which was powerful enough to provide good visual comparisons. 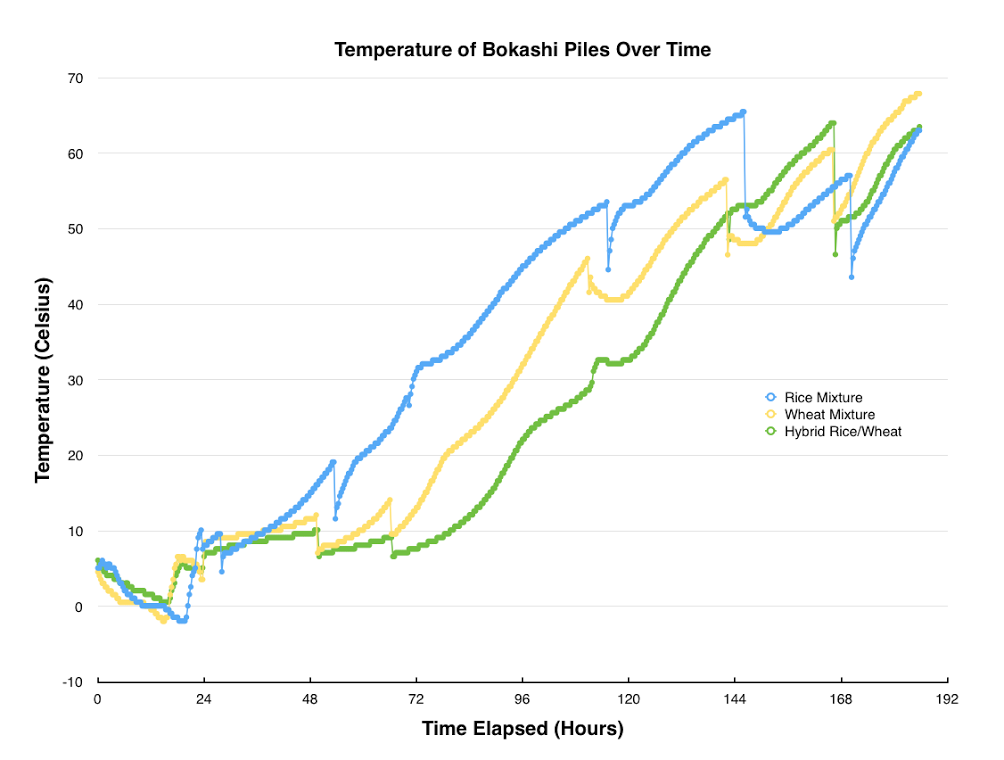 Peter and Terese focused more on lifecycle analyses of ARI, with Peter investigating corn as a potentially diverse resource. In recent years, more of ARI’s annual participants are coming from African countries, where corn is a staple crop. The institute is working on integrating more corn into their program to make these participants feel at home, and also so that the practices they learn here are easily transferable to their home communities. By talking to ARI staff members and contacting past participants, Peter created a flow chart detailing the individual components of an ear of corn and how each part could be utilized around ARI, making use of information about their nutrient compositions. Terese also completed a lifecycle analysis, but centered her investigation on the ARI pigs. While ARI does an incredible job of being self-sufficient and utilizing everything that is produced on the farm, including using pig manure for biogas production, Terese addressed the concern that this practice wouldn’t be fully transferable to other communities. By contacting a former participant from Myanmar, she created two flowcharts comparing the lifecycles of pig production at ARI to pig production by an ARI graduate, finding that sources of protein for feed were the hardest to come by for the Myanmar graduate, who imports feed components from Thailand.

Team Radiation also presented today, which I can give a more thorough explanation of. As a bit of background, the Asian Rural Institute is in Tochigi Prefecture, which was heavily affected by the nuclear fallout resulting from the March 11th, 2011 Fukushima triple disaster. ARI has been extremely careful about the safety of the crops that are grown here and donated money to start the ARI Becquerel Center (ABC), which provides radiation-testing services for both ARI and the surrounding community. Our group is working with the people at the Becquerel Center, who have graciously agreed to analyze samples for us during our time in Japan.

Since ARI already has comprehensive data on the cesium levels in their crops (all which fall well below the Japanese food standard of 100 Bq/kg), all three of our projects focus on the forested areas on site. These areas, which previously were used for mushroom cultivation and as a source of lumber, have been left relatively untouched since 2011 when the radiation levels made the continuation of these practices impossible. Our hope in focusing on these forested areas is to give the ARI community a better understanding of how and when this ecosystem may be utilized again. In addition, our findings may contribute to an understanding of how cesium moves through forest ecosystems on a broader scale, which is applicable given that 71% of Fukushima Prefecture is composed of forested areas and the majority of the fallout was initially distributed across this ecosystem type. Understanding the ways in which radiation moves throughout the landscape is essential in developing efficient land management strategies and maximizing health and safety, which we hope to contribute in small part to.

Jordan’s project addressed the issue of mushroom cultivation in the ARI forests, which was stopped immediately after levels of cesium in the mushrooms were found to exceed the 100 Bq/kg food standard. He investigated the levels of cesium found in mushrooms in addition to levels in various sections of the logs that the mushrooms are grown on to better understand how mushrooms capture cesium from their surroundings. Jordan also looked at footage from three motion sensor cameras that the class set up around the property to better understand how the landscape is utilized by wildlife such as tanuki (Japanese raccoon dogs), cats, and foxes.

I investigated how cesium moves through forest soils, specifically looking at erosion as a potential transport mechanism. One patch of the ARI forest is located at the southern property boundary alongside a steep bank. I analyzed the top few centimeters of soil at several locations along this slope to evaluate if and how the distribution of cesium is affected by erosion. In addition, ARI stores radioactive material such as ash from the fireplace in special bags designed to shield a portion of the radiation. These bags are kept at the top of this forested slop, so I focused my sampling efforts next to the storage site to determine if the bags are acting as a source of cesium to the environment. My data indicates that erosion— which is affected by both slope and vegetation patterns— as well as input of cesium from the bags likely are playing a role in the distribution of cesium across the slope.

Nate looked at a forested area at ARI to determine how cesium levels in the canopy have changed over time. To do this, he sampled leaf litter and compared the radiation levels in older layers at the soil-litter interface to newer layers at the surface of the forest floor, as well as to more recently fallen litter that is still green. Comparing the cesium levels in these three categories of leaf litter revealed important information about how radiation levels have decreased over time, with the green leaf litter showing levels of radiation much lower than older layers of decomposing litter as well as recorded levels in leaf litter since 2011. 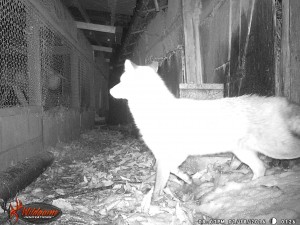 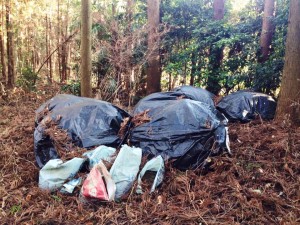 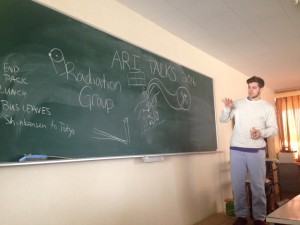 Tomorrow morning, the whole crew will be boarding a plane for our journey home. It’s unbelievable how quickly this month has gone, and simultaneously astounding how much we have learned in just 28 days. I think I can speak for everyone when I say that we have a million stories we can’t wait to share with everyone back home, but also that some of our shared experiences, such as our recent trip to Fukushima, will take much more time to process. We’ll miss the food at ARI, the songs before every meal, fighting over who gets to feed the pigs, and arguing about whose room is colder, but the lessons we have learned here and the friendships we have made will never fade away. It’s been said time and time again, but thank you so much to everyone at ARI for being so incredibly welcoming and showing us all that We May Live Together!