Today, I began writing my final paper on food alienation and its effects on perceptions of and interactions with the natural world. It has been so revealing to sort through my thoughts and experiences with various food cultures and attempt to compile them into a meaningful report. My reflections have led to many evaluative thoughts regarding my experiences with food alienation growing up in the United States in relation to food and farming relationships that I have observed and experienced in Japan. 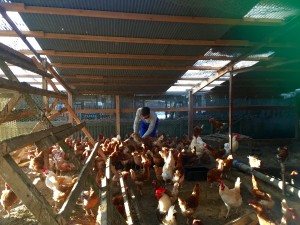 Despite being raised in Iowa, the land of corn, soy, and pigs, living and participating in daily life at ARI has been my first genuine farming experience. I grew up visiting relatives and friends on their farms across the state, driving through seemingly endless agricultural fields in attempts to escape the Corn Belt, and seeing enormous livestock parading around the state fair, but never have I been so involved in the process of food production. And it’s been eye opening.

Before participating in Environmental Conversations as a first-year student at Olaf and studying agriculture in Japan, I never actually thought about where my food was coming from. Growing up, my family always had a garden full of fresh fruits and vegetables, we belonged to the local co-op and a CSA, and I spent every Saturday morning running around the Iowa City Farmer’s Market. But, despite these experiences, I still didn’t have a complete understanding of how my food was being produced and ending up on the plate in front of me.

While writing my paper, two experiences that I have had while staying at ARI stick out in my mind as extremely contrasting to my previous experiences with food alienation in the United States. The first is a second-hand account of an interaction that occurred during morning pig feeding, in which a group was instructed not to feed two of the pigs because they were being sent to the slaughterhouse down the hill later that day only to become dinner in Koinonia. This prompted the first time (that I can remember) I have ever thought about the meat on my plate having a last meal, or even a last day. 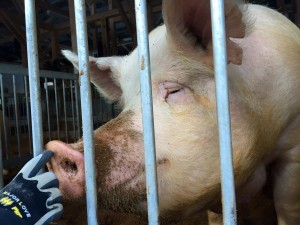 ed as mealtime was ending and an oddly shaped chunk of pork was left remaining in a friend’s bowl because it was un-chewable. We started examining the piece of meat closer and attempting to identify various parts of it as a severed tendon and maybe some remnants of cartilage, finally concluding it might be some sort of joint. Being able to distinguish the various parts of the animal in the meat I was eating was so different from the homogenous slabs of meat that are typically served in the US.

For me, both of these experiences confirmed the reality that the food I consume is something before it becomes my food. Food doesn’t magically appear on our plates. It takes time, labor, and energy to produce everything that we consume. Too often do we forget this, only exacerbating the environmental and social costs, including concerns of water scarcity, pollution, and exploitation of the land and its workers, that occur as a result of widespread food alienation.