Remembering the Plight of Yanaka Village

One of the many reasons studying abroad here in Japan has been so incredible is that sometimes the opportunity arises to actually visit the locations we’ve been reading about in our textbooks. A few days ago, our class visited the Watarase Basin, the site for much of the discussion in Bad Water by Robert Stolz. The Watarase Basin is a wetland that contains the largest reed marsh in Japan. What is most intriguing about the basin is that it was actually created by people through the manipulation of the Watarase River. This was a government project executed during the beginning of the 20th Century as a response to massive amounts of pollution contaminating the river from the Ashio Copper Mine, located north of the basin. The goal was to contain the contaminated water in a reservoir to prevent it from traveling any further downstream, especially because the river eventually makes its way to Tokyo. Creation of the reservoir also allowed for improved flood control in the area.

However, this solution had its complications. Located at the proposed site was Yanaka Village, a settlement that 2,500 villagers called home. In order to continue with the project, the government ordered the villagers to pack their belongings and leave the village that their ancestors had cultivated for hundreds of years. Unsurprisingly, 16 families refused to leave Yanaka Village so the government took action and destroyed their homes. These villagers remained diligent in their claim to the land, building shacks and continuing to reside near the village. Those villagers who were displaced were given land throughout Japan, but much of this land was not suitable for agriculture. Many lost everything they had.

Over a century later, Watarase Basin has become a thriving ecosystem critical for the migration patterns of many waterfowl and the home to 183 endangered species. Despite being man-made, the importance of the basin to Japan’s ecology is so significant that in 2012 it was added to the Ramsar List, an international designation dedicated to the conservation of crucial wetlands. 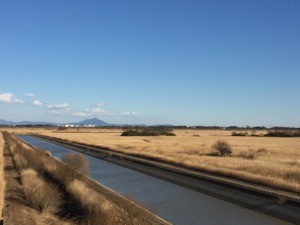 The manipulated Watarase River leading into the reservoir viewed from the observation tower.

During our tour of the basin, the first place we stopped at was one of the recently completed, man-made ponds where we did some bird watching and could see another pond being constructed in the distance. We had just finished reading Bad Water, so as we were observing the basin, Stolz’s arguments were swimming around in our heads. When learning about the history of the Watarase Basin, it was difficult to imagine how an ecosystem created through human manipulation could function. Difficult as it was to comprehend, visiting in person brought even more questions to mind. Is this as natural as other ecosystems that have experienced less human influence? What is nature? What would the ecology and biodiversity of this place look like if humans hadn’t completely transformed it? Would this sort of manipulation work in areas devastated by pollution, deforestation or some other harm? For me, the basin presented more questions than it did answers 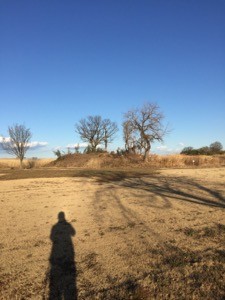 With these thoughts, we moved on to see the view of the reservoir from an observation tower. From there, we had reached the final portion of our trip, which was to walk through the remains of Yanaka Village. Initially, I hadn’t realized that we were inside the village. It had seemed like we had come to a park where the reeds had been tamed, trees planted and benches occasionally placed along the paths. It wasn’t until we came across a cement slab, which our guide explained was where the village office used to stand, that it hit me. I began noticing similar cement slabs, often on the raised portions of land, with the trees concentrated around them. These areas were the former homesteads of the villagers, elevated as a precautionary measure against the floods of the Watarase River before it was tampered with. The layout of the area made me feel that what used to be there still belonged there and, without those buildings and without the people who inhabited them, the land seemed incomplete. There was an odd eeriness to the place. I felt as though the desire of the Yanaka villagers to stay in their homes and their anguish for being displaced was almost tangible. 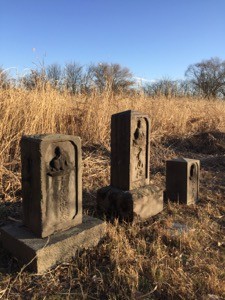 A part of the history of Yanaka Village’s destruction and the creation of Watarase Reservoir was the villagers’ demand that their holy sites, a Shinto shrine and Buddhist temple and graveyard, be preserved. After painstaking negotiations, the government conceded and the shape of the reservoir was modified to circumvent the temple and shrine. Upon reaching these sites during our visit, we found that although the location was preserved, the buildings had not escaped the government’s destruction and had been removed along with the rest of the village. What struck me was that even though the buildings were gone, there was a sense of sacredness attached to the location that I had not encountered at any of the other temples or shrines we had visited this month. Dotting the area were graves of monks and villagers alike, as well as markers commemorating especially good harvests. These acted as stone reminders of the people who had once been there. Rather than becoming tourist attractions like many of the temples and shrines in urban areas, the villagers’ devotion to their holy sites allowed the location to act as a sacred legacy for the village. 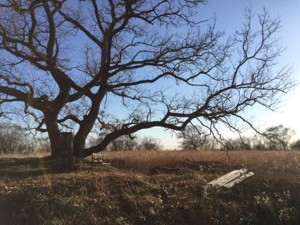 One of the larger villager tombstones near a tree in the graveyard.

Near the temple and shrine sites was a sign erected by a citizens’ organization to protect the village ruins. Their message stressed that it was “imperative to remember this land as ground zero in the history of Japan’s pollution and the anti-pollution movement”. This movement to protect the village remains as memories of past events really speaks to how important it is to learn from our actions. If we permit ourselves to view this place as a successful project to prevent flood damage, contain pollution and create a thriving ecosystem, we are left with a sense of hope. This is simplifying the situation. We must not forget that these accomplishments were only possible through considerable suffering, not forget what the land could’ve been, and not forget the atrocities that made the project necessary. We have to continue thinking about the history of Watarase Basin and the efforts of the Yanaka villagers to decipher how we should strive to interact, both with nature and with each other.