What is the meaning of eating and surviving?

I have been staying in Japan for about 10 days now. We stayed in Tokyo for the first few days, exploring what good food is and where it comes from. On Jan 6th, we took a high-speed train from Tokyo to Tochigi, and settled down at the Asian Rural Institute (ARI). I must say that I am truly blessed to be there, and be with a wonderful community. 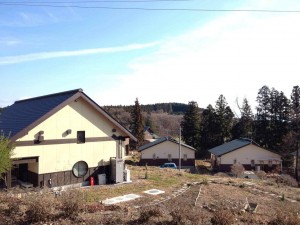 The view from my dorm 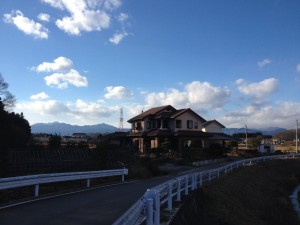 The neighborhood is very beautiful and peaceful 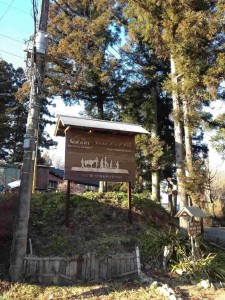 “That we may live together”

ARI is a Christian organization that trains rural leaders from all over the world who are dedicated to organic farming and sustainable development. The motto of ARI is “that we may live together”. The motto is manifested in many aspects. First, even though the institute is rooted in Christianity, it welcomes people from all faiths, beliefs, and backgrounds. Second, one of the three pillars of ARI is community building. Therefore, we have a lot of “together” time every day. In the morning, we need to get up before 7 am and do morning exercise together in a big circle at 7 am. When I was in China, I did similar morning exercises with all the other students from elementary school to high school. However, this is new for most of my American classmates, because they’ve never done this kind of exercises with so many people before. The practice of morning exercises demonstrates the difference between collectivist and individualist cultures. Doing morning exercises together as a group is a wonderful way to build a community and start a new day. At St. Olaf, since everyone has different schedules, I rarely did anything with so many people at the same time.

After the morning exercise, we start our foodlife right away. Our classmates are divided into different groups, doing work related to crops and vegetables, livestock, cleaning and preparing for meals. In the first few two days, I sorted soybeans in the morning with my group members. It was quite relaxing because we could sit in a warm room and pick out the bad or broken soybeans. Since it was relaxing, we were able to talk and do our work at the same time. For me, it was a wonderful chance to get to know my classmates and the volunteers at ARI because I barely knew anyone in my class before I came to Japan. 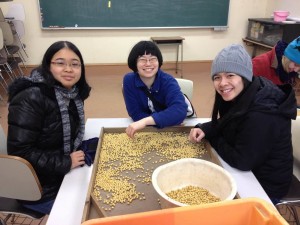 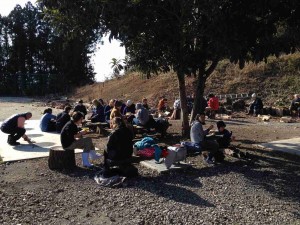 Eating together on a wonderful sunny day 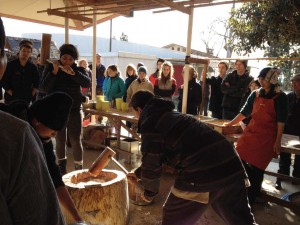 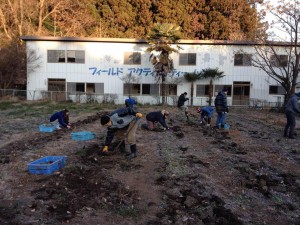 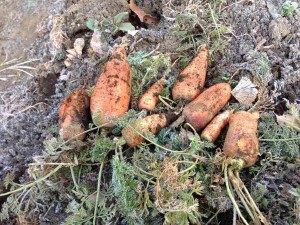 Natural carrots are not perfect! 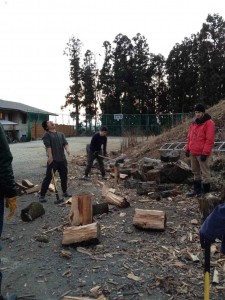 After the one-hour foodlife, we have our breakfast together. At ARI, eating is always a pleasure and the main way of building relationships. The food is so tasty and healthy, and we usually sit at a round table where we can share stories and listen to others easily. After each meal, one group needs to do dishwashing for that day. I did the dishwashing on the second day we arrived at ARI. I usually don’t like to do dishes at home. But the work is far less tedious when I do it with other group members. We chatted and laughed together, and it was fun to watch some other groups singing together while doing dishes. Work is always much more interesting when it doesn’t feel like work.

After breakfast, we have a little bit of free time before we head to chapel. We have our classes in the morning and afternoon. Lunch is usually at around 12:30pm and we need to do some chores from 1:30pm to 2pm. During this period, I am assigned to chop woods, which is a challenging job for me. During the first day, I tried to cut a piece of wood many times, but after 20 minutes, nothing happened. It is so true that everything takes time and practice. I was very happy when I finally split a piece of wood open the next day. The evening foodlife work is from 4pm to 5pm. We usually do the same things as we do in the morning. Dinner is at around 6:30pm. After dinner, we have a lot of free time before we go to bed. Since we need to get up really early in the morning, we are encouraged to go to bed early. When I am at St. Olaf, I often go to bed after 12 because I have a lot of schoolwork. But at ARI, I usually go to bed no later than 12. It is really nice to have such a healthy schedule and be able to take time to sit down for breakfast in the morning. When I was at St. Olaf last fall, everything was in a rush in the morning. I either did not have breakfast or just ate a muffin on my way to class because I wanted to sleep more in the morning. Even though I am not a morning person, I have always wanted to get up early and do more work in the morning instead of staying up late at night and feeling tired the next day. I am satisfied that I am able to achieve this goal at ARI so far.

Here are a few more specific things that I want to reflect on.

One of the most meaningful things that I have learned at ARI is that food and life are inseparable. In class, teacher Osamu guided us to think about the meaning of eating and surviving. Our life is sustained by the sacrifice of others’ life. It is sad to think about this because it is obvious that many animals die because of our food choices. It doesn’t mean that we should all turn to vegetarians (it is impossible for many people and I am not ready to do it either). Instead, we should think more seriously about where our food comes from and be more conscious about the consequences behind our own eating and consuming habits.

“We crave flesh, but we are allergic to blood and death… We have become alienated from the source of our food” (Japan at Nature’s Edge, p.11). Many people waste a lot of food, because they often don’t know or cannot tell where it comes from directly. Additionally, since it is too easy to buy all kinds of food in many countries, people tend to throw away the food they don’t like and pick what they favor.

In China, food used to be very scarce in my parents’ and grandparents’ generation. Under the planned economic system before 1980s, Chinese people had to use coupons to buy nearly everything, including flour, rice, food oil, eggs, meat, clothes, etc. Even though people had money, they were not able to buy whatever they want. My parents told me they craved meat very much when they were little because they were only able to eat meat a few times a year, usually during big festivals. After the rapid economic reform in China in 1980s, people are able to buy anything they want as long as they have money. (If you are interested in China’s history of food coupons, you can check out the link here: https://www.ventureoutsource.com/contract-manufacturing/food-coupons-china-history/ )

The market economy and consumer society have made many of us feel like food is unlimited. When we need food, we can just go to a supermarket or a store. We know that food is always there (otherwise the stores would be closed). But it is not true. Natural resources are so limited and we are already using the resources for the next generations. Sustainable development is the only way for humans to preserve the natural resources and live harmoniously within nature.

Since it is always hard to change other people’s opinions and behaviors, we should start from changing ourselves first. I am very glad that I chose this interim program. Participating in foodlife and doing farm work at ARI is extremely helpful for deepening my own understanding of the interconnected relationship of food and life. Yesterday, I fed the chickens and collected their eggs for the first time. At the beginning, I was very scared to walk into the chicken house because I had never been so close to so many chickens before. After I fed the chickens, my job was to collect the eggs that the chickens laid. Even though I was told to push out the chickens while collecting eggs, I was very scared about disturbing the chickens. I stared at them for a while and started to talk to them. I told them about my harmless intention and asked them to temporarily leave their place for hatching eggs. Unfortunately, they did not understand me and therefore did not move at all. So I had to ask one of the volunteers there for help at the end. After collecting the eggs, my group members and I cleaned them one by one slowly. We were all extremely careful because, according to Cora (one of the volunteers at ARI), those who break the eggs will go to hell (She ended up breaking one egg herself though. We laughed at her after that happened). 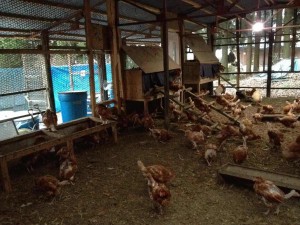 “So many chickens! Please don’t bite me!” 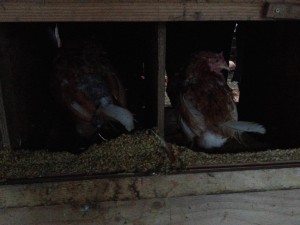 “I’m sorry to bother you. Can you move a little bit so that I can get your eggs? Just a little bit would be perfect.” 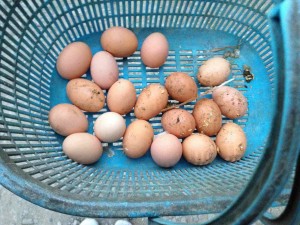 In Chinese, the pronunciation for egg is “Dan”. There is only a slight tonal difference between my first name and “egg” in Chinese. Therefore, some friends called me “egg” when I was little. Yesterday’s experience was especially special to me because it brought me closer to my “species”. Ironically, one of the dishes for last night’s dinner was curry chicken with potatoes. I was hesitant to eat the chicken because after doing all the work, chickens are more sacred to me now. However, I still ate it eventually because it was a main course for dinner and it was really tasty. Later that day, Hikari, Eric, and I were talking about our meat consumption behaviors. I shared with them a story from my friend. My friend’s grandma had to kill the chickens for her whole family and cook them for many years. Every day, she had to break the necks of these chickens until one day she decided she couldn’t do it anymore. My friend said that, “her grandma was too compassionate to kill the chickens and told her family they could eat chicken, but she wouldn’t be the one killing them.” (http://zhaochunxia.tumblr.com/post/117957471691/adventures-with-grandma-vegetarian-spring-rolls)

Hikari and I both think that we might not be able to eat chicken meat anymore if we have to kill the chickens by ourselves. Therefore, to some extent, alienation from the source of food saves us from seeing blood and death and therefore provides us with more food options. However, because we cannot see the food-making process directly, the lack of connection between food and life often makes us too numb to empathize with the animals who sacrifice for us on a daily basis. Why are humans so privileged to live? Who deserve to live a good life? I will end this blog post by bring up the question from Osamu Sensei again:

What is the meaning of eating and surviving?