The first night in Tokyo’s Hotel Sakura Ikebukuro was fairly quiet; after a curry dinner in the hotel’s cafe, the inhabitants of Room 101, comprised of Dan, Marianne, and I, came back and prepared for bed. This is a quick sketch of the room, drawn the morning after. 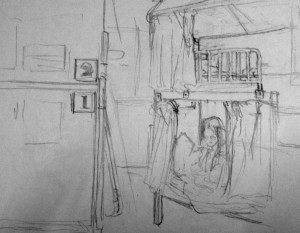 The girl whose head is sketched is Dan. Marianne took the bed across from Dan’s, and I chose the bed above. These beds were very capsule-hotel-esque in that there was a light in each of them and the curtains could be drawn shut to create a separate space.

“What is good food?”

This was our first question to start munching on. The itinerary for the day (Jan 4) was to go to a Ittoyokado イトーヨーカドー, a market akin to a Super Target, and then go to a depachika デパ地下, or a department store underneath the subway station. The two, although similar in that they were both fairly large corporations running chains of large stores that sold a variety of goods, have very different origins and intentions in mind and so were organized differently. Ittoyokado and stores like it came about as a result of trade laws with the U.S. Put very generally, in the beginning Toys R Us wanted to expand their market into Japan and the U.S. government complied with their wishes, forcing most of the traditional smaller grocers and food sellers out of business and superstores like Ittoyokado to come about. Unfortunately I didn’t think to sketch anything at Ittoyokado, but I’m sure others have pictures to share.

I say ‘superstore’ for Ittoyokado, but that’s really only in comparison to the smaller grocers; in comparison to a depachika (a word mashup between ‘department’ and ‘chika’, or basement), it looked miniscule in comparison. There are various different railroad companies that run depachika; in addition to railroad holdings and depachika, said companies also hold power within other industries as well, such as real estate agencies. Going around a depachika was really quite overwhelming; we were given a choice between two depachika located under Ikebukuro station, Seibu (西武) or Tobu (東武). I walked around with a group of 5, and as the one who could speak Japanese I lead the way, but even after walking around Seibu for an hour I don’t think we even scratched the surface of the grand labyrinth known as a depachika. Essentially it got to the point that all the food looked the same, and although they were wrapped very nicely and looked good, the sheer amount of food that we looked at from various different brands and stores essentially made any appetite we had after lunch evaporate.

Something I noticed between Ittoyokado and Seibu was the different sort of environment each store strived to create in presentation and human interaction to sell the food. Although it strays a bit from the question of “What is good food?” a bit and shifting to give emphasis to the context in which good food can be defined, I definitely felt that the presentation of food as it was handed definitely changed the interaction with the food. To give a bit more context, Ittoyokado, in being more of a market that people go to for groceries and other daily necessities such as clothes, there was a combination between food placed out in the open and packaged food, and the shelves of food had more space to allow for people with baskets and carts. As such, the prices were also cheaper than those at Seibu. Seibu also had groceries, but they were more expensive, and the people buying them were not buying them for daily groceries. They were for gifts to other people, and given the fact that most depachika are located near railway stations, this makes a lot of sense, as it is convenient for people traveling to other places to be able to buy gifts for the people they are going to visit.

Both Seibu and Ittoyokado had uniformed employees who used the customary Japanese honorific form spoken to customers, but it was different in that it seemed more like Seibu was advertising through its environment the authenticity and professionalism of the various brands it had, whereas Ittoyokado was designed to show an environment that understood and was friendly to the average Japanese daily grocer. Given Seibu’s purpose of selling gifts, it makes sense that it has a lot of different brands, both domestic and international, for different sweets and foods, but each brand had their own distinct uniform and the entire store was brightly lit. It’s not to say that Ittoyokado was dingy, but there was much more effort to make the various brands and things shine. Seibu also had more resources (information centers, maps, signs, etc.) in different languages that allowed for more accessibility for tourists and so was prepared to deal with those from other countries.

Ittoyokado was more local in scope, so I don’t remember whether there was even English directory. Of course, Ittoyokado’s layout was much simpler and so it did not particularly need a directory, but its environment was clearly thought out for its more local clientele. The Ittoyokado employees seemed astonished that there was such a large group of foreigners walking about; the man who was advertising green tea commented and asked me about it as I sampled some of the tea. 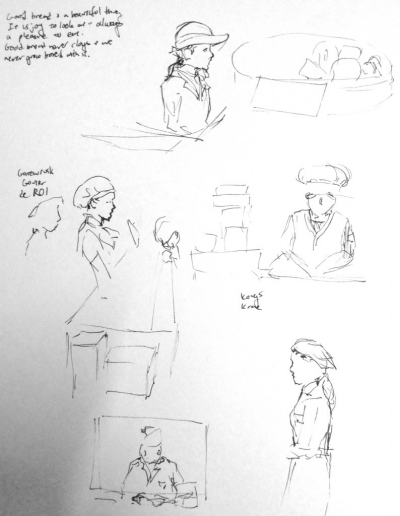 The demographic of people at different places in the store also varied, and this was highly noticeable at Seibu due to the amount of employees it had. The employees working at Seibu’s fancy packaged sweets section were primarily women in their 20s-early 30s, but one floor down to the grocery section and the demographic changes drastically to middle aged women and men. The lowest left sketch on the drawing to the left is of a man slicing fish in the window showing the kitchen in the grocery section, while the rest are all different people working at the register of the packaged brands sweets section. Ittoyokado also had a slight discrepancy in demographic, but it was much smaller. Showing the preparation of food through clear windows seemed to be common between Seibu and Ittoyokado as well.

The most obvious changes that these presentation styles had on the interaction with food on the consumer end is that it set groundline rules for how the food was used after purchase; Seibu’s food was more for gifting and Ittoyokado for daily meals. At the same time, though, I feel like there were more subtle effects that intertwined into one another, combining in a complex interaction involving the context of the food. In a nutshell, at this point in time I’m not really sure how to sum it up due to lack of information and concrete observation. Since we’ll be looking at more food places in the coming month, I hope I can get more of an idea into the relationship between context and food, both on the dimensions of the presentation and proposed use of food from the distributor, as well as the preparation, use, and consumption of food on the individual scale. 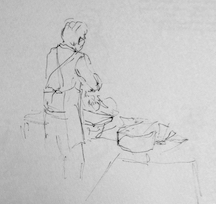 This is more of a side note, but food was also used to advertise other goods too; the left sketch is of a man in Seibu advertising vegetable peelers through peeling various vegetables. He was doing a demonstration, cooking spring rolls while comparing between different peeling brands, both domestic and international, and had drawn quite a crowd. I was able to talk to a lady selling other goods nearby, and she told me that this man had been doing such demonstrations for over 20 years and that many of the people working in grocery had been working for years. That piece of information really left an impression on me; I feel like jobs such as this, like selling things at grocery stores or markets are so easily dismissed as menial and unimportant in comparison to the more intellectual, ‘professional’ jobs. To see someone who has in a sense become a ‘professional’ with peelers and the different textures each peeler can make on vegetables really left an impression. Since one of the topics of class discussion is of understanding the whole through specifics, it made me really wonder how many people working as grocers, either on a small, local scale or on a much larger, supermarket or depachika scale have become, over the years, to be very knowledgeable about the produce they sell, and how that might affect their opinions and thoughts on Japan’s food network at large.

Below are some more sketches that detailed the rest of the day. 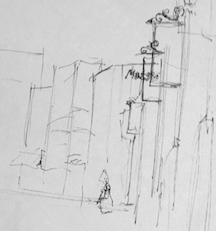 A quick sketch of the view to the right after getting out of the West Exit of Ikebukuro Station. There was a Colonel Sanders on one the buildings that I wanted to sketch, but I ran out of time. 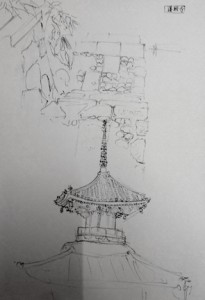 To the right is a sketch of the steps and a building in Gokokuji, which is the place KTP took the class after we were a bit worn out by Seibu and looking at packaged goods. Gokokuji is a temple in Tokyo with affiliations to the Tokugawa clan, built in 1681. An elderly man who was cleaning the Hitokotojizo (一言地蔵, a jizo believed to grant one wish) showed me how to burn incense to it, and various people from the class bought fortunes from the shrine. There were quite a few people about, ranging from businessmen to students.

Afterwards we were allowed to wander about and go out on our own; I joined a group of about 20 and we went to the Tokyo government buildings to see the view of the city. It was a very clear night, and the view was stunning. It was also very surreal in that in the dark most of the buildings melded into one another so it was very difficult to tell where some buildings began and some ended; there were even some with reflective windows that showed a reflection of the streets, making the entire scenery seem very dreamlike. Below is my attempt at a sketch; the lower left black part was a park, and I promise that it looked a lot more mysterious and nicer than the lines I abstracted it to. The two stamps at the top were the memorial stamps that one could get. 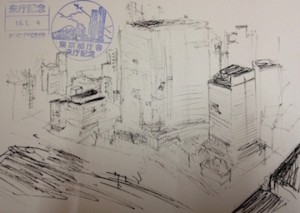