St. John’s Lutheran Church of Northfield, Minnesota was named after St. John the apostle of love. St. John’s has always looked through a lens of love and compassion for all aspects of life; handling changes with grace, looking forward and preparing for what the future may bring, and centering itself around a commitment to service.

Bernt Julius Muus, a Norwegian Lutheran immigrant pastor, organized the congregation in 1869. The Reverend Muus made extensive missionary journeys and became a great Lutheran missionary of southern Minnesota. On March 1, 1869 Rev. Muus installed the first pastor of St. John’s, Reverend Nils Quammen, resident of Minnesota. These men were partners in establishing sturdy and stable Lutheran churches. Quammen was a supporter of St. Olaf College and a gifted multilingual preacher who remained devoted to the St. John’s congregation as it continued to grow and prosper.

Muus left his imprint on St. John’s by the way he emphasized the importance of synod congregations. St. John’s was a member of the Norwegian Synod, the most prominent of the four Norwegian Lutheran church bodies in the Midwest, but was not entirely happy about its alliance with the Missouri Synod. When a large number of pastors and congregations, on account of doctrinal differences, left the Norwegian Synod in 1887 and organized as the Anti-Missourian Brotherhood, the Northfield congregation joined with the latter group and in 1890 became a member of the United Norwegian Lutheran Church of America. In that same year, it was incorporated under the new constitution and changed its name to St. John’s Lutheran Church of Northfield, Minnesota.

In the early 20th century many Norwegian Lutheran farm families moved to Northfield to give their children the educational advantages offered by the local colleges and schools, and a number of families moved in and bought land in the vicinity. St. John’s congregation grew rapidly, largely due to St. Olaf College’s student body and faculty growth. St. John’s began without its own building. It was evident that this growing membership needed better accommodation in an appropriate building. For some years the services were held in St. Olaf Hoyme Chapel but that did not suffice. The only satisfactory solution would be to build its own new and larger church. With the help and dedication of many congregation members, enough money was raised for a new site on the west side of town.

By the 1880’s, St. John’s Church was most concerned with establishing a Sunday school and building a house of worship for congregation members. The congregation also felt called to initiate more community-based programs. Some of St. John’s very successful programs in the late 1880’s and early 1900’s included: Ladies’ Aid Society in 1875, which played a significant role in raising funds for the new building; adult confirmation classes; Mission Society; Senior Luther League; Junior Luther League; Lutheran Brotherhood; Young Women’s Guild; Sunday and Wednesday schools; Boy Scouts; music and choir. Worship, music, and education have been and are central to the congregation’s life.

From its beginning St. John’s has looked forward. Historically, the congregation approached bilingual competence more rapidly than any other Norwegian Lutheran congregation in the country. St. John’s congregation has been a hopeful, devoted, and cooperative congregation in which many good and faithful men and women, pastors and laypeople have combined their efforts to serve God and the world. St. John’s has a rich history of support for and direct involvement with world missions and resettling displaced persons after WWII and refugees from Southeast Asia from 1875 to present. 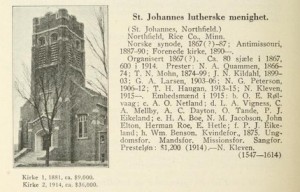 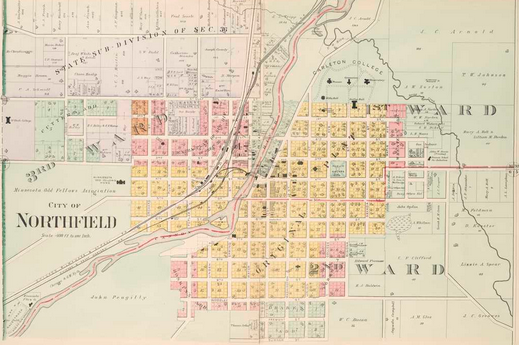 The only interior photo of the first church. The wedding of George Homnes and Frida Bue in 1909.

The young elms planted in the boulevard shortly after the church was dedicated had grown into majestic shade trees by spring in the mid-30’s.

Main Building, St. Olaf College, Northfield, MN. West exterior view. The chapel in which St. John’s services were held, occupied the southwest quarter of the second floor, with five windows on the right of the picture.

Many of the Sunday School teachers were recruited from the St. Olaf College student body in the early years. This group taught in 1909.

The Sunday School picnic was held on the banks of Heath Creek west of town in May, 1910.

A second, larger group of people displaced by World War II and brought to Northfield by St. John’s had flowers to celebrate their arrival. 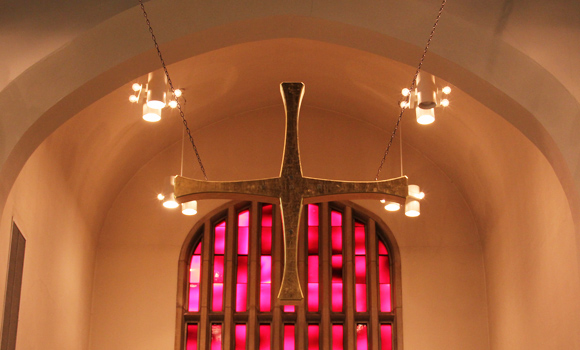 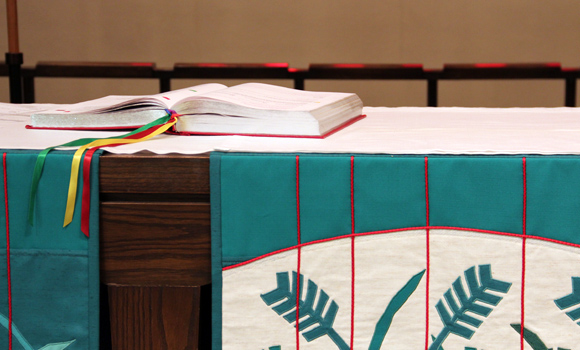 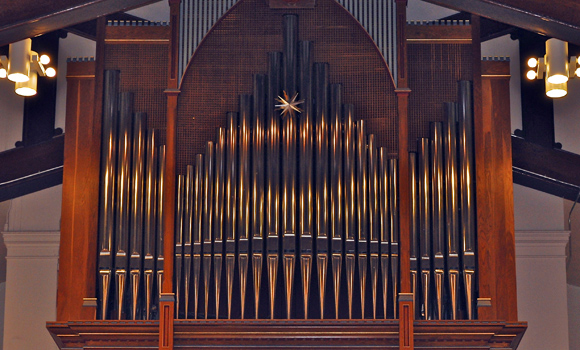 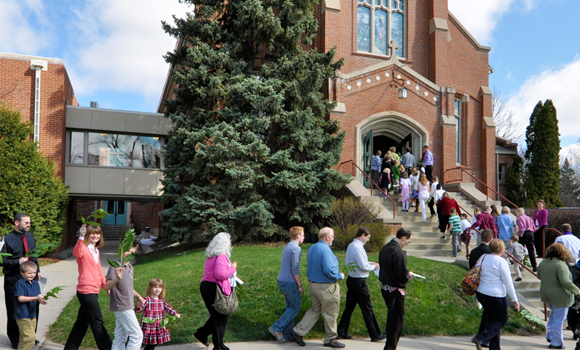