In the early years of Norwegian immigration Lutherans were eager to establish churches.  Differences of theological emphasis, styles of piety, region of origin, or personal dynamics contributed to founding multiple congregations in a relatively small area, although the realities of transportation by foot or wagon meant that what seems like short distances today required longer to travel then.  Norlie included nearly 1550 Minnesota congregations in his directory. However, over 400 had already closed by the time he published his data.  Of those nearly 100 lasted only a single year; although some endured more than a decade before closing. A smaller number divided to form new congregations.  Even fewer reorganized or changed their affiliations.  Only a minority have endured to the present day. 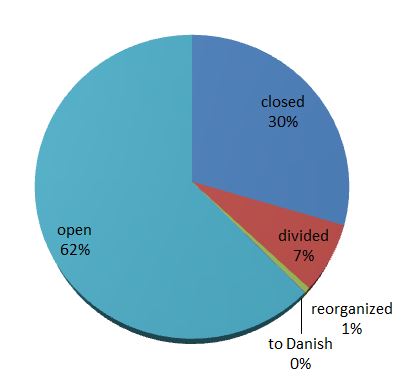 Trondhjem Lutheran, rural Rice County, was established in 1876. This building is no longer in used; it was restored in 2002. However, the congregation now meets in a new building constructed in the 1980s.