Close your eyes. Imagine your home. Whatever that means to you. Your pets, your favorite book on its shelf, your neighbors, your school, Sunday dinners with your family. And now imagine all of that being taken from you. This is the reality for the 4 million+ people between 1960-1983 who were forced to move out of their homes because of the color of their skin. Apartheid laws mandated segregated housing divided into African, colored, and Indian communities (such laws reflected many earlier policies, too). The places they moved to became the areas known as Cape Flats. The townships are located outside of Cape Town, and are a mix of small government-built houses and informal aluminum shacks. They are still highly segregated by skin color. Today, the center of Cape Town is predominantly white, Indians have the townships closest to the city, coloured (sometimes referred to as “so-called coloureds”) live in the next townships out, and the black Africans reside in the areas furthest from the city, sometimes as far as 19 miles from the center. 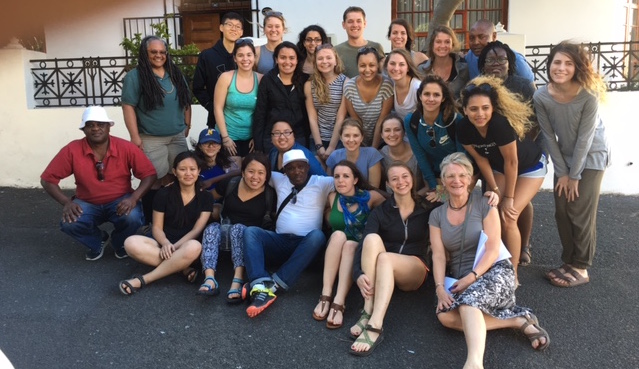 The group with our three guides.

We have had the opportunity to witness the realities of these townships first hand. Guided by three former soldiers of the anti-apartheid struggle, our journey of remembrance took us through memorials and important sites of the fight against apartheid. The history of these communities is grounded in anti-apartheid movements led by youth, often ending in tragic killings. Our first stop was Langa, the first established township inhabited only by blacks. The next stop was Athlone, a coloured township. We visited Gugulethu, the place of the Gugulethu Seven, Crossroads, where one of our guides lives, and Khayelitsha, the largest of the Cape Flats communities that consists almost entirely of informal shacks. 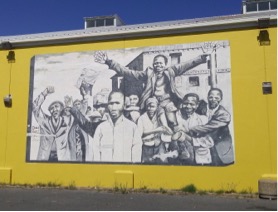 The final township we made was to the community of Victoria Mxenge (VMX). Here we had the opportunity to visit with some residents and hear their stories. This township was built entirely by women who saw a need for better housing for their families. Because of the displacement under apartheid, the post-apartheid government promised reparations in the form of housing for the people in the townships. About 280 women in the township of Khayelitsha got tired of waiting for the government, saved money to buy a plot of land, and built their first houses that became Victoria Mxenge. They learned how to make bricks and mix concrete and eventually grew to 5,000 residents today. Many children and grandchildren of these women are now studying a broad range of subjects at university, including engineering and finance, and have a drive to give back to the community that raised them. One way they do this is empowering other youth through dance. The children in the dance group shared their skills with us with a performance to end our day. 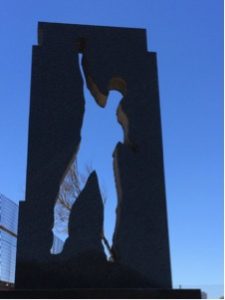 Memorial to the seven youth who were murdered on March 3, 1986 during an attack in the township of Gugulethu

Over the next couple days we saw other examples of how people came together to better their lives. For example, we visited a vineyard whose owner shares ownership in a trust established with the workers. We also met former Mandela Rhodes scholars who work to improve the lives of others all over Africa. These last three days have shown us the strength that can come from pain and survival to empower individuals and communities.