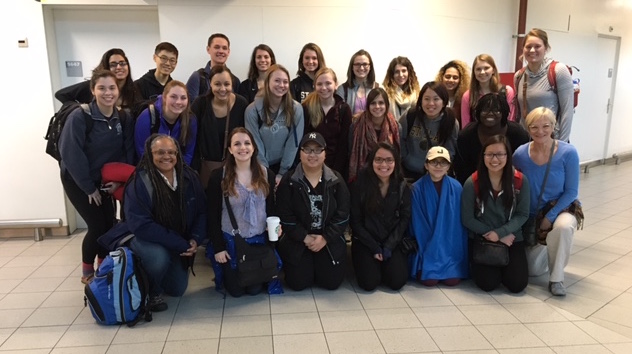 Our first group photo at the Cape Town airport; we are excited for this journey!

It was past midnight when we finally arrived in South Africa.  Despite our jet lag and
discomfort, we were excited to listen and to learn about the social realities of this country.  Driving from the airport to our guesthouse, we observed dimly lit houses made of scrap metals and cinder blocks on one side of the road.  High walls then obstructed our view.  Meanwhile, bright lights illuminated trendy restaurants and bars on the other side of the road, not a shack in sight.  Our first drive in South Africa profoundly highlighted a juxtaposition of social realities for different South Africans in Cape Town.

During our program, we met with Reverend Alan Storey at the Central Methodist Mission. Alan enlightened us of the reality that Cape Town is one of the most segregated parts of South Africa.  White people make up approximately 20% of the population in Cape Town.  However, as we walked around the city, the majority of the people we encountered were white; the few black people we saw were mainly in service positions.

At the District 6 Museum, we had the opportunity to absorb some of the history of South Africa.  The forced removal of black and coloured South Africans is evidence of Cape Town’s historical segregation that continues even today, post-apartheid.  Not only did we learn about the forced removals, we also were able to take a peek at the diversity of life and people that once existed at sites like District 6. Prior to the forced removals, District 6 was home to people of different cultural and religious backgrounds who came together to form this beautiful community. It was a place booming with diversity.

That same day, we also had the opportunity to visit Robben Island, the site where many ex-political prisoners like Nelson Mandela were imprisoned. Former political prisoners themselves, who shared with us their painful memories of the injustices and torturous acts that were committed on that island, led the tours of the prisons. Although we were honored to be able to hear these first hand stories, we could not imagine how difficult it must be for these ex-prisoners to tell these stories again and again. We were even more surprised to learn that many former prisoners still remain on that island even today, living and working together. 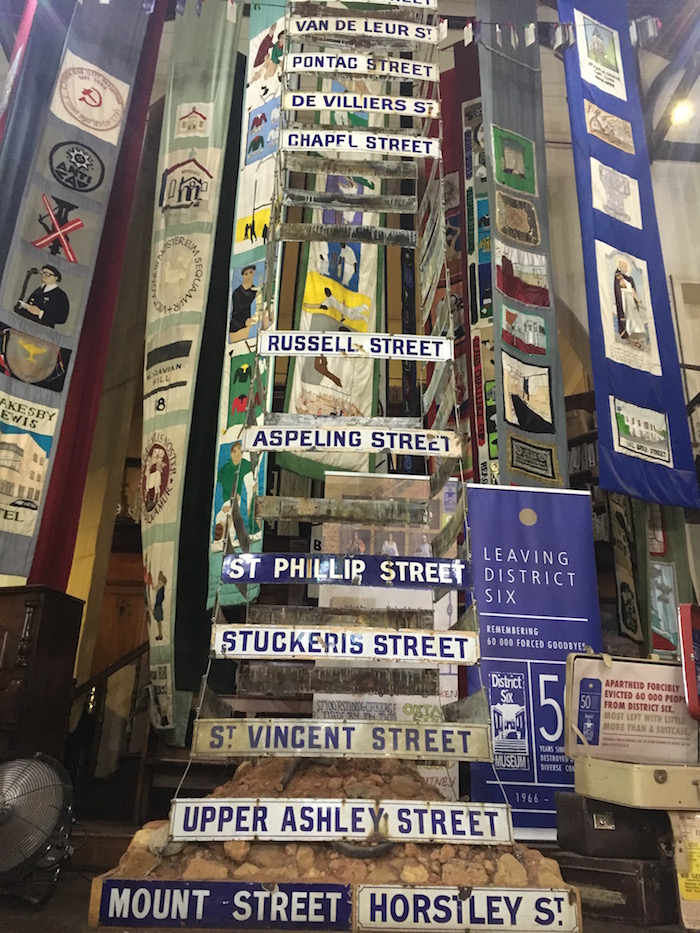 A destruction worker removed these street signs from District 6 but preserved them for historical purposes.

Robben Island and District 6 are examples of a real issue: people may forgive, but must not forget. The courage and resilience of past District 6 residents and the ex-political prisoners were powerful reminders to remember and learn from the consequences of apartheid; we must never forget the atrocities that were committed, and work towards eliminating discrimination of any form in the future. We are excited to continue this journey and anticipate learning more about the continuing legacy of apartheid for South Africans through their lived realities.