Established in 1856 as the earliest Norwegian Synod Church in Goodhue County, Minnesota, Holden Lutheran Church honors its Norwegian heritage. The first members came from a little village called Holden in Telemarken, Norway, so this name was chosen for the congregation. The men and women of pioneer days searched the scriptures, prayed and worked hard so that Christ’s work might be advanced in rural Minnesota. As the area became settled, Holden Church served as the mother church for many of the newly formed Lutheran parishes nearby. The congregation values a system of mutual support and collaboration.

The early settlers came to Goodhue County in 1854. Before the congregation was formally organized, the Reverend N. Brandt arrived. He performed the first baptism and marriage recorded in Holden’s church records, as well as brought the Gospel to the settlers in their native language. Later, other pastors led the congregation and preached in multiple places. Among these pastors were P.A. Rasmussen and H.A. Stub who proposed a constitution that prepared to call a minister for Holden. In 1859 the Reverend Bernt Julius Muus was installed as the congregation’s first pastor.

For 40 years Muus served Holden and neighboring congregations. Serving up to twenty-eight congregations in the early years of his ministry, Muus baptized 9377 children, confirmed 5288, married 1218 couples, and officiated at 3909 funerals. He spent much time traveling to conduct worship, making in his first year as pastor a total of 6900 miles. He was a man of vision who could see a variety of matters a different way. For example, Muus challenged the language barrier in congregations. He worried that by offering services in only Norwegian and not English congregations excluded many potential members. There is no doubt that Muus had a brilliant mind. The academy he started at Holden in 1869 was moved to Northfield in 1874, now it is St. Olaf College. Muus’ deep devotion to serving others shaped the nature of the Holden congregation.

In 1861 the Holden congregation built a church. The building served the needs of the congregation for 63 years until it was replaced by the present structure – an impressive brick building overlooking the prairie. In 1862 Holden was admitted to the Norwegian Synod, dedicated to preserving the worship, doctrine, and practices of the Church of Norway. In 1890, the Norwegian Synod consolidated with other synods to become the United Norwegian Lutheran Church, which sought to provide a sense of balance in church order and lay activity, pietism and orthodoxy. Holden has demonstrated its synodical identity by producing publications and forming charities and missions.

From the beginning Holden established its vision for mission and its commitment to reaching out. The congregation maintains a hospitable and caring relationship to neighboring parishes. Dale Lutheran (1857) and Holden have been joined as a parish for almost 150 years. Since 1899 the two have had joint call committees and have been served by the same pastors. A devastating fire burned Dale Church to the ground in 1947. Holden invited Dale to use their church.

The rural location of Holden Lutheran Church has been a vital characteristic of the congregation. The connections to nearby parishes have strengthened Holden by helping worshippers to grow spiritually, involving people in the church, building a strong sense of belonging, and empower leaders to engage in their communities. For the past 40 years and still continuing Holden and the neighboring Dale congregations have been part of an 8 church cooperation supporting seminary interns for a year of their training. The congregations are very proud of this contribution to the greater church.

The historic Holden Lutheran Church had many successful programs including: Ladies’ Aid, Girls’ Society, Luther League, confirmation instruction, Sunday school, music, organ, and choirs of all ages. Music has a large part in Holden’s church services – whether it’s the majestic pipe organ or the happy voices of the Sunday school choir, the music is always appreciated. Music is a way for Holden to reflect on the great heritage that the congregation has.

Holden Lutheran Church is grounded in its call to mission. From the generous and faithful pastors – only ___ number of pastors have served in over 150 years – to the dedicated and loyal laypeople, Holden congregation was an early leader in Christian education and outreach. It has made great contributions to the history of St. Olaf College and from this congregation many churches were established. It has been a missionary-minded congregation since its founding. Holden has a tradition of youth serving on mission trips and gives most of its income to mission related services outside of the church. With a deep sense of history, Holden Lutheran Church strives to connect people with their spiritual heritage and honors each individual’s gifts and talents.

Fevold, Eugene L. “The Norwegian Immigrant and His Church.” Vol. 23. Page 3. Triennial Meeting of the Norwegian-American Historical Association. May, 1966. Presentation. 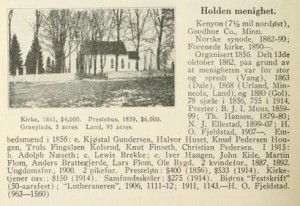 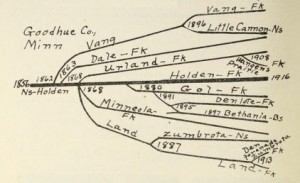