A mixed group of Scandinavians in Minneapolis founded The Evangelical Lutheran Augustana Congregation in 1866; two years later the Norwegians and Danes withdrew to form Trinity Lutheran.  At the time most Norwegians lived in rural areas of the upper Midwest, but over the next decades an increasing number of new immigrants and Norwegians migrating from the country moved into cities including Minneapolis, Brooklyn, and Seattle.  By the 1890s Norwegians were the second largest group of foreign-born residents in Minneapolis; Swedes were first and Germans third.  Trinity Congregation, located in the heart of the Scandinavian neighborhood, had over 1,200 members.

Over the course of its first century the congregation worshiped in a series of three churches: the first two in the vicinity of the current Guthrie theater and the third, completed in 1902, several blocks to the south east at 20th Avenue and 9th Street South. The congregation earned its nickname, the Mother Church of the Lutheran Free Church, by nurturing new congregations, by its part in forming and supporting key Lutheran institutions, and by its role in synodical affairs.  The members and leaders also were energetic participants in the civic life of the growing city.

Since Augsburg College moved to Minneapolis in 1871, Trinity has been closely associated with the college and with the stream of Lutheranism it represented.   The college’s early professors, notably Sven Oftedal and Georg Svedrup, belonged to the congregation.  Members of the “Conference” held their final meeting at Trinity and there welcomed the delegations from the Anti-Missourian Brotherhood and the Scandinavian Augustana Synod for a festive worship celebrating the formation of the United Church in 1890.  That harmony was soon disrupted by disputes over the status of Augsburg and St. Olaf College within the new church body.  The Friends of Augsburg, including Trinity, withdrew and organized the Lutheran Free Church (LFC) in 1897.

Even before the LFC articulated its belief that “free and living congregations” are the basic form of the church, Trinity was a model of that principle and committed to fostering living, active faith in its members.   Haugean and Johnsonian pietism informed the congregation’s appropriation of its biblical and Lutheran heritage which affirmed lay leadership and attended to the ‘social dimension of Christian faith.’ (Tiede in Hamre’s history, p. ?)  While grounded in biblical notions of freedom, the LFC was also influenced by democratic political ideals then emerging in Norway.

Various educational programs and a full array of organizations nurtured members’ religious experience and equipped them to act on their faith.  Kvindeforing (the women’s society) was the first auxiliary founded in 1875.  The Tabitha Society, devoted to service to the poor, included non-members.  As in other congregations—rural and urban—Luther’s Small Catechism and Pontoppidan’s explanation were central to education for children.  These texts also provided the basis for resolving theological debates between the Norwegian Lutheran church bodies.

Trinity’s urban setting put members in frequent contact with people outside their ethnic and religious community.  M. Falk Gjersen, Trinity’s pastor for two decades from 1881, and his professorial colleagues set an example of civic engagement.  Gjertsen and Svedrup collaborated with Sister Elizabeth Fedde to establish the Norwegian Lutheran Deaconess Institute and Hospital.  Gjertsen and Oftedal served on the Minneapolis school board and Oftedal on the library board as well.  With attorney Andrew Holt the two were among the founders of the (pan) Scandinavian Lutheran Temperance Society which expanded its scope and changed its name to the South Minneapolis Temperance Society.

Both evangelical zeal and controversy fueled Trinity’s efforts to form new congregations.  Bethlehem (1894) resulted from differing views in the Augsburg College controversy.  Bethany (1902) was founded by supporters of Pastor Gjertsen who was accused of writing love letters to Ester Paulson while traveling in Norway.  More happily, Sunday Schools prepared the way for new congregations in other parts of the city: St. Petri in Northeast Mpls in 1887, St. Luke on Lake Street in 1891, and (Zoar) First Lutheran of Columbia Heights in 1912.  Olivet, on Franklin Avenue in 1911, was launched as an English language ministry.

During the 1960s, when it was displaced by freeway construction, members made a deliberate decision not relocate.  Rather they occupied a series of buildings, including space shared with a Roman Catholic parish. Currently worship is held Augsburg College chapel.  Trinity now is the sole Christian congregation in Cedar-Riverside and continues active involvement in the neighborhood.  Its members include recent immigrants from Ethiopia and Eritrea. With offices in a building on Riverside Avenue, its ministry includes interfaith gatherings, a weekly neighborhood meal, and support for those living with loss. 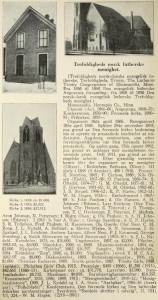 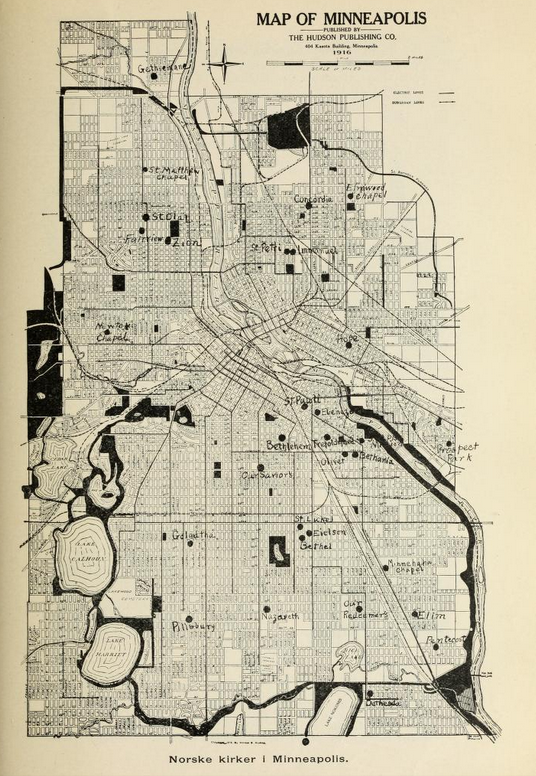 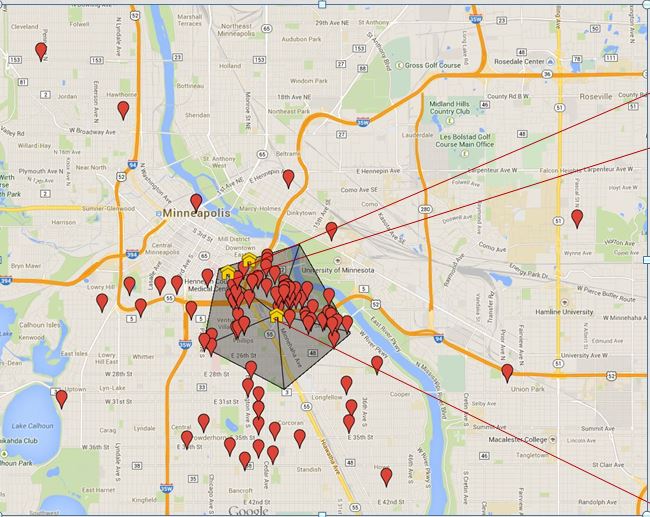 Residences of Trinity Members in 1917

Elizabeth Fedde and other deaconess in Minneapolis