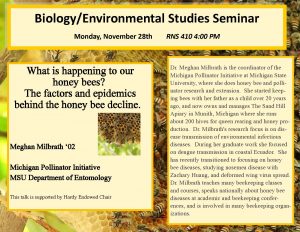 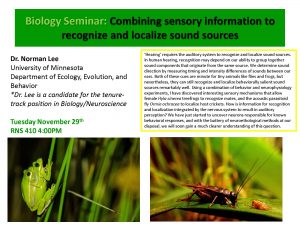 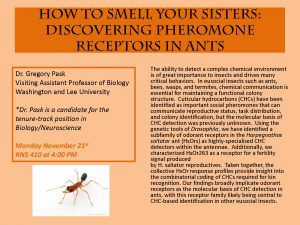 *Dr. Mora is a candidate for the tenure-track position in Biology/Neuroscience

The arrival of echolocating bats in the Paleocene posed such a strong predatory pressure on moths, that it is widely accepted that ultrasonic hearing in these insects was originally in place as a defense mechanism against bat predation. When moths countered to the bat´s echolocation with ears tuned to ultrasonic frequencies and evasive flying maneuvers, some bats responded by moving the frequency of their calls away from the peak sensitivity of moth ears. Certain bats in the Caribbean however, specialized in hunting moths by using distinctive echolocation strategies that allow them to overcome moth hearing in the mid-frequency range, where moths hear best. Molossus molossus alternate call frequency to fool tone-deaf moth hearing. By performing as if flying away for the moth’s ear, this bat masks its acoustic tracking behavior. Multiharmonic call design used by mormoopids is another strategy that allowed these other species to detect and classify insects while minimizing their acoustic conspicuousness. But the evolution of moth hearing also allowed the prey to counteract against the high frequencies used by bats. Combining laser-Doppler vibrometry, distortion-product otoacoustic emissions and electrophysiology techniques, we have discovered that the moth´s ear undergoes a mechanism of dynamic tuning, therefore able to match its frequency of best audition with that of the echolocation of sympatric bats. The bat-moth story is a “magic well” that continues to provide scientists with refreshing insights. Within the ongoing bat-moth acoustic arms race, echolocation diversified into sophisticated strategies, but in response to echolocation, the moth ears already counteracted. 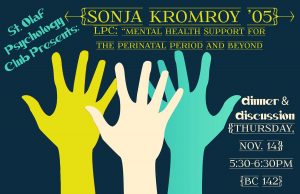 Abstract: Catalan numbers have many interpretations in mathematics. To
name a few, the n-th Catalan number counts the dierent number of ways
to triangulate a convex (n+1)-gon, the number of rooted binary trees with
n leaves, and the number of ways to bracket a nonassociative product of n
factors.
A quasigroup has a nonassociative multiplication that is cancelative, so it
comes with right and left divisions. We will introduce peri-Catalan numbers
that count the reduced quasigroup words in a single argument appearing n
times.

Bio: I am a fifth-year Ph.D candidate in Mathematics at Iowa State University. I expect to complete my degree in May 2017. I am working with Dr. Jonathan Smith. My work is in nonassociative algebras; my dissertation research consists of two main projects. The first involves finding a good isomorphism invariant for linear quasigroups. This research involves representation theory of quasigroups and category theory. My second project has a combinatorial flavor – I am examining the number of inequivalent length n quasigroup words in a single generator that involve all three quasigroup operations, the so-called n-th super-Catalan number.

My “for funsies” math interests lie in classical geometry. If you haven’t studied The Elements, The Conics, The Almagest, or Principia, you’re missing out.

Spatial Data. What is it and what can we do with it?
Lindsay Shand, University of Illinois at Urbana – Champaign.
3:30 pm in RNS 210 (Note: change in location)

In this talk, I will give an overview of spatial analysis and its application to environmental and disease data. I will introduce some common questions researchers want to address with such data and present some more complex spatial problems that I deal with in my research.  Cookies and conversation.

Math Club is showing the film The Man Who Knew Infinity on Thursday, November 10th at 7:30 pm in the 6th-floor lounge of RMS. The movie is a biographical drama about Srinivasa Ramanujan, a real-life mathematician who after growing up poor in Madras, India, gained admittance to Cambridge University during WWI and ultimately made major contributions to the mathematical field. One of the movie’s producers, Ken Ono, will be speaking at Math Across the Cannon this spring, so this is a great opportunity to see the movie before hearing Ken speak. There will also be popcorn and s’mores to roast, and assorted beverages!

Biology Seminar : This week TBD – stay tuned to your email. We will update you when we can.