Where do constitutions come from?

We read together a section from  Michael Klarman’s book The Framer’s Coup in which he argues that the framers of the Constitution of the USA were far less devoted to democracy than many Americans today might assume. Rather he demonstrates their suspicion that allowing voters too much authority would undermine the hard fought virtues of the nation. They were able to enact structures that limited popular authority such as the electoral college and election of senators by state legislatures in part because the delegates were largely of one mind. Some men who might have taken another path declined to attend. In addition the convention strengthened the federal government at the expense of the states. Thus, as our theme for this unit suggests and the title of Klarman’s book echos, the anti-imperial, democratic commitments articulated in support of the Revolution were limited.

For good or for ill at the time, decades later we’re reconsidering.  Witness the increasing number of ballot measures, talk of recall elections, and calls to abolish the electoral college.

All of this is one spur to think again about where our constitution came from. 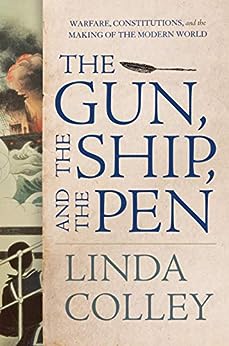 Looking for a photo of a pocket edition of the Constitution to use in class I also happened upon a New Yorker piece by Jill Lepore in which she discusses The Gun, the Ship, and the Pen: Warfare, Constitutions, and the Making of the Modern World by Linda Colley. Boiling down Lepore’s account, Colley argues that far from being inspired by the ideals articulated by proponents of  social contract, expensive wars resulted in the need to collect taxes and the need to collect taxes lead to rulers being willing to grant some concessions to some of the rulered. Lepore’s summary is provocative. And I assume it is fair to Colley’s argument.

Perhaps it also provides another reason to not be surprised that an elite group of men produced a constitution that utilized republican measures to constrain democratic impulses and consolidate political power.