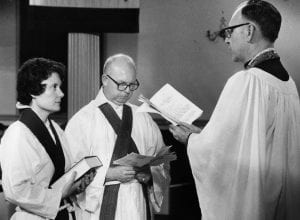 Photo used with permission of the ELCA Archives

On November 22nd, 1970, Elizabeth Platz made history by becoming the first ordained Lutheran woman in America. A first-generation college student and graduate of Gettysburg Seminary, she had been working as a lay minister at the University of Maryland-College Park for the five years prior to her ordination. She was one of a small number of women who were qualified for ordination directly after the approval of women’s ordination in 1970. Platz remained dedicated to her ministry at College Park and worked as a chaplain for her entire career, retiring after 47 years of service at the university.

In this regard, Platz was distinctive among the group of initial pioneers in women’s ordination. The field has a high rate of burnout among women, often attributed to stress and discrimination that the early female clergy faced while balancing the positions of role models for the female community and responsible members of the clergy. Janith Otte, the first woman ordained in the AELC in 1976, had herself removed from the roster of official clergy in the mid-1980s due to an unhealthy level of stress. That Elizabeth Platz persisted within her career for 47 years is quite remarkable.

Platz has often acknowledged the contributions of those who helped her in her journey to ordination, many of whom were male clergy. The high level of support that she received, especially from leaders within her synod, also makes her journey distinctive. Many clergy women encountered strong opposition from male clergy, while the male clergy close to Platz seem to have been quite supportive. In her essay “My Story, Our Story,” Platz credits former Gettysburg Seminary President Donald Heiges for suggesting that she complete a course of study in systematic theology and Maryland Synod President Paul Orso for encouraging her to not apologize her gender and even counseling her to, “act like you belong, for you do.” This is not to say that Platz didn’t face opposition to her ordination – she recalls being called a “whore of Babylon” among other insults – but that she also received invaluable support from the male clergy in her life that likely gave her the necessary support to sustain a 47-year career in ministry.

In regards to historical accomplishments, Elizabeth Platz’s ordination was significant as it was the first ordination of a Lutheran woman in America. Due to this milestone accomplishment, Platz has been seen and represented throughout her career as a symbol for the advancement of women within the church. She is often seen more for this single action than for her daily contributions to her university and ministry within 47 years of dedicated service. Like other female clergy members, Platz has worked hard to be accepted as a clergy member and be seen as a pastor before all else. When describing her own ordination, Platz emphasized her spiritual call and distanced her decision from cultural events, saying, “ ‘I’m not much of a Woman’s Lib type,’ she said, ‘I’m not being ordained to prove a point—that I’m as good as a man.’ ” In this way, Platz tries to turn the narrative of her ordination away from herself, as an individual, and more towards her spiritual call to serve the gospel. Because, while she was the first woman to achieve ordination, she sought this ordination not to put her in the spotlight of the press, but to enable a lifelong career in the ministry.

Documentary: Lamp Unto My Feet – Ordination of Pastor Platz

Photos of Platz’s ordination from the ELCA Archives Flickr