Reflecting on the Power of the Audience

It was a whirlwind of a month in DC. We visited sites all over the city and attended a truly astonishing amount of performances. Along the way we discussed funding, censorship, accessibility, citizenship, engagement, and countless other ideas. All of these issues speak to the connections between arts and democracy and are important to discuss as artists, consumers of art, and citizens of this country. But through it all, one topic specifically has been on my mind since our very first night in the city: audience.

For most artists of any kind, audience is a significant part of the equation. When art is engaged with by anyone other than the artist, it takes on a new life. Art incites emotions and reactions, inspires creativity, creates social change, heals, hurts, and everything else in the book.

The reality is that audience, and their relationship to artists, is one of the most important and complicated parts of artistic engagement. I also see it as the best framework to understand the role of civic engagement in the arts, and how equity and democracy help form artistic spaces.

Let’s break it down:

There are spaces where the art and the audience are in complete, unwavering agreement from the beginning. The art in these spaces is often making a strong, divisive statement. As a result people of differing opinions steer clear, assuming that they won’t enjoy the performance since they already disagree. While they are not intentionally created that way, the result is a homogeneous group combining audience and artists. These spaces are often called “echo chambers” colloquially. Though they are sometimes disregarded, in practice, they can become a church-like experience for the audience and the artists. These spaces can be a safe space for people who have historically been silenced. When people feel heard and represented, and the power of collective understanding acts as a rallying cry.

Two examples of this kind of space come to mind from this month. First, She the People at the Woolly Mammoth Theater. The show was blatantly pushing liberal ideals, often overtly insulting conservative views and leaving no room for interpretation. To my best knowledge, it seemed that the audience already agreed with their message; the intent was not to change anyone’s mind, but to remind everyone to fight for their cause. The other example is the work of Janae Williams, an artistic fellow at Halcyon Arts Lab. She stated that her work is exclusively made for “black folk”. She talked about how although her intentional exclusivity offends some people, she believes it crucial to her work to create that space and lift up those voices.

It is important to recognize though that these spaces can also become quite toxic, and their one-sided nature can be unwelcoming or even unsafe. While hearing a common opinion echoed can be empowering (as in the examples above), there are times when disagreement is also necessary. There is value in reaching an audience that disagrees, even if their minds are not changed.

Then there are spaces where the artist intentionally speaks to a community they do not belong to. Instead of creating a space of agreement like the previous example, the artist works to communicate a message to a community intentionally different from their own. These dynamics create profound examples of cross-communal discourse and often (but not always) use more subtle methods to do so.

An example of this dynamic can be found in the work of painter Robert Duncanson, whose work we encountered at the Smithsonian American Art Museum. The specific work we saw, Landscape with Rainbow, was painted in 1859, and appears to be a traditional landscape painting at first glance. However, Duncanson was an African-American artist painting for an almost exclusively white, abolitionist audience. He used this position to his benefit by taking the opportunity to speak a powewrful message to an audience quite different from himself. It is believed that this painting is a subtle representation of the underground railroad, but that is not definitively known. 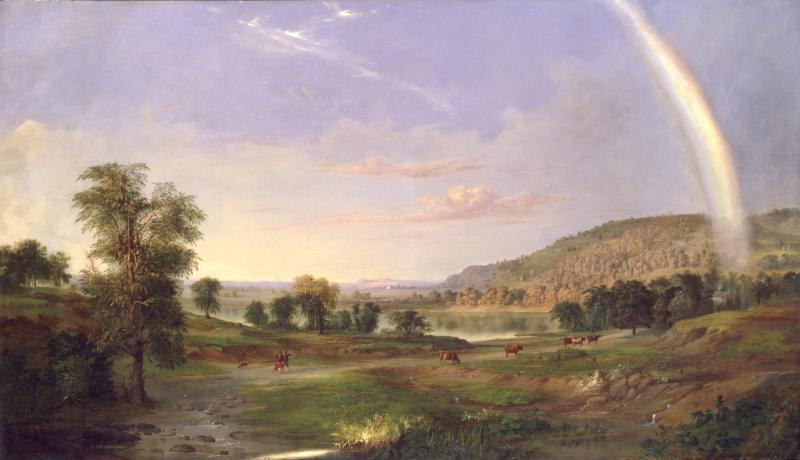 Now that we have a handle on those 2 ends of the spectrum, let’s tackle the ones that fall in between:

Most arts events fall in between organically, and there are an infinite number of different outcomes that can result. A wide variety of factors play into who attends what performances: income, programming, access, perception, type of art, and even simply personal preference all play a role. So what is the result? A mix of people in the audience that bring their own unique experiences, beliefs, identities, and backgrounds. They may be in conflict with one another or even with the artist. The point is, it’s not controlled.

At their best, spaces like this create an environment where people can learn from their differences, engage with the art and with one another intentionally, and walk away with a heightened sense of shared humanity. The performance we saw from District Community Playback is a perfect example of this. The diverse audience at that performance came together to share stories with one another, and engaged in meaningful conversations that brought them from strangers to allies in understanding.

However, at their worst, spaces like these lose their effect. Even the most powerful message can fall flat when the audience being spoken to isn’t equipped with the best tools to listen. In order to become a powerful space that gap needs to be filled (but more on that later).

So… what does all of this mean?

That question is what I’ve been thinking about throughout our time in DC. It is certainly not my place to claim that any artist-audience dynamic is more valid or effective than any other. I see the benefits and downsides to every space, and I see examples of when they work well and when they do not.

What this means is that the arts are an ecosystem, and an incredibly complex one at that. Each type of artistic space I described holds a unique place in the ecosystem and fills a specific need. Sometimes what is needed is an “echo chamber”, where a silenced community can finally feel heard. Sometimes what is needed is a mix of people that can learn from each other and share their stories. That does not mean one is more or less valid, they are just different.

But it doesn’t stop there. This month has also taught me the importance of being wholeheartedly intentional in creating an arts space. When worldviews in the audience differ from the worldview of the art, there is a gap that needs to be filled. Usually that is accomplished through education: program notes, community discussions, cast talkbacks, or any other engaging way of priming the audience for what they are about to engage with. The other piece of the puzzle here is accessibility and equity: spaces that want to be truly diverse and create that kind of conversation need to make sure that anyone can engage with their art regardless of ability.

The practice of intentionally engaging audiences, both through education and accessibility, is where I see my personal role in the arts world. I came into this course knowing I wanted to help bring the arts to people, but I didn’t know how to find a niche in that space. It is easy to say that I’m passionate about the arts, but it is so much more powerful to be able to talk about why; to say that I’ve seen the restorative power of the arts in action and want to protect that. I always knew those things were true because I felt them in myself, but the opportunity to see that happen in others and have those stories to tell alongside my own is invaluable. Now I am armed with the perspective and experiences I need to explain why equity in the arts is essential. In the interest of sustaining (or even saving) our democracy, equity in all forms is crucial. Quieted voices need to be heard, people left at the door need to be let in. As we have heard from so many people, art holds the power to do just that; but the right people need to hear it.

Civic engagement in the arts is advocating for those who are not being heard. It functions to resolve those art spaces where the message is being lost, where the people who should be in the audience are not, where people do not have the tools to critically engage with the art as it was intended. Art is an invaluable tool, and equal access to it means equal access to its restorative power. I would love to see more policies on all levels of government, ensuring equitable access to art and arts spaces for people of all abilities. Sherrilyn Ifill, the 2020 Humanitarian Award Recipient, said it best in her acceptance speech: “We don’t do art because it makes us better at math; we do art because it joins us together and makes us ready for the fight ahead”. I hope to use what I learned this month to work towards making art equitable. Not only is it moral, it is critical to the democratic power of the arts.