I would call myself an incredibly reflective person. While the majority of this personal reflection exists internally, I am dedicated to recording as many of these scattered thoughts as possible. I am constantly writing, whether it be in whatever random journal, notebook, or piece of scrap paper I have on hand or in my trusty Notes app that holds an odd mixture of miscellaneous poems, shopping lists, and personal epiphanies. Whenever I have a thought that seems especially significant, meaningful, or useful, I must write it down for whatever purpose I find for it later. Since reflection is so important to my personal growth, I will be using this post as a reflection on my month in Washington DC and as a way to compile and reflect on these varied pieces of wisdom (and reminders to buy more apples at Trader Joes).

The first of my Notes app poems from this trip actually comes from our first orientation to this course. In late October, our class first joined together to begin preparing for the whirlwind trip that we would be facing in January. In this meeting, Professor Epstein and Alyssa challenged us to create “Lightning Poetry,” a concept from a Minneapolis-based event this summer, Let the Water Speak, by poet Joe Davis. In our exercise, we compiled a list of words (formatted in italics in the poem below) that spoke to either democracy or the arts and then wrote poetry containing these words in three minutes. My poem, creatively titled “Democracy,” speaks to my expectations and assumptions of my experience in Washington DC.

“Democracy”
Does freedom truly exist?
Our people, this place, our land, are not truly free.
The equity of our nation is tainted by the desire of power by our government.
In our quest for equal representation, the power of the people has been traded for the influence of the elite.
So, we the people are called to vote, protest, FIGHT.
The law will not restrict us, but will instead free us in our resistance.
We the people will rise up.

As I reflect on this poem after my time in DC, I find that I came into this trip believing that American democracy had died and been replaced by a government driven by a “desire for power” and personal gain. One of my most prominent takeaways from living in the politics-fueled culture of Washington DC for three weeks is that our government is not failing, especially in regards to the arts. In our meeting with staff members from the National Endowment for the Arts and the National Endowment for the Humanities, I learned the full extent of the federal government’s support of programs, projects, and initiatives directly related to arts practice and humanities education. The staff at the NEA and NEH revealed and explained how the United States federal government funds and supports arts initiatives for the values and benefits of the arts in developing and sustaining a cultural identity of American arts practice. 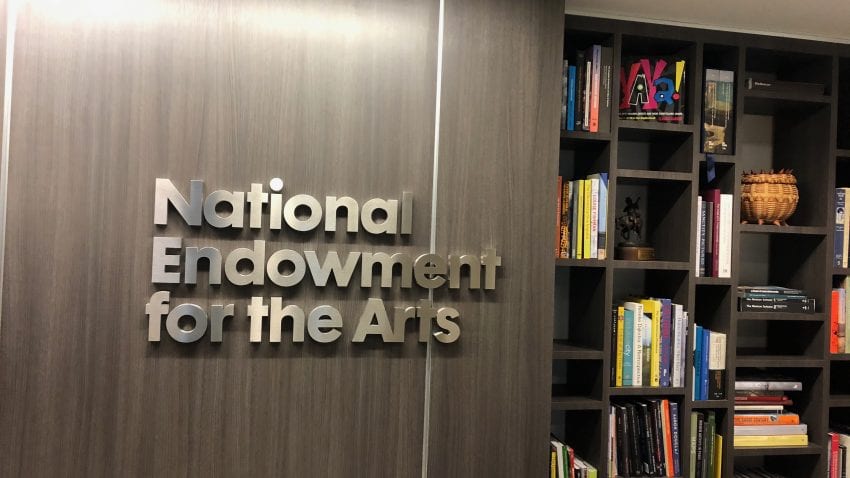 Entryway at the National Endowment for the Arts

It is easy to buy in to the media’s view of the American government as a failing system run by politicians who do not care for the “little people” who make up the general population. I too bought into this idea of ~the government~ existing as an abstract and impersonal concept, entirely separate from my idea of the public sphere. My experiences in Washington DC taught me otherwise. My interactions with the political side of DC, from meeting Senators Amy Klobuchar and Tina Smith to receiving passes to sit in on House and Senate meetings, made it clear that the government is truly for the people. The openness of Senators Klobuchar and Smith to meet and speak with our class was surprising to me, but made it clear just how dedicated congresspeople are to hearing from their constituents. These experiences ignited a more politically-engaged attitude in me that I am eager to continue growing as I head back to my own communities on campus and in Northfield. I have learned about my identity as a citizen and how I can better be an “agent of social change,” using my personal skills and passions to invest time in the causes that I find important. I urge readers to reflect on their own civic identity and how they can become more active in their curiosities. All US Americans should know their duty as a citizen of this nation and how their personal rights and responsibilities should influence their efforts in giving back to whatever community they call home. 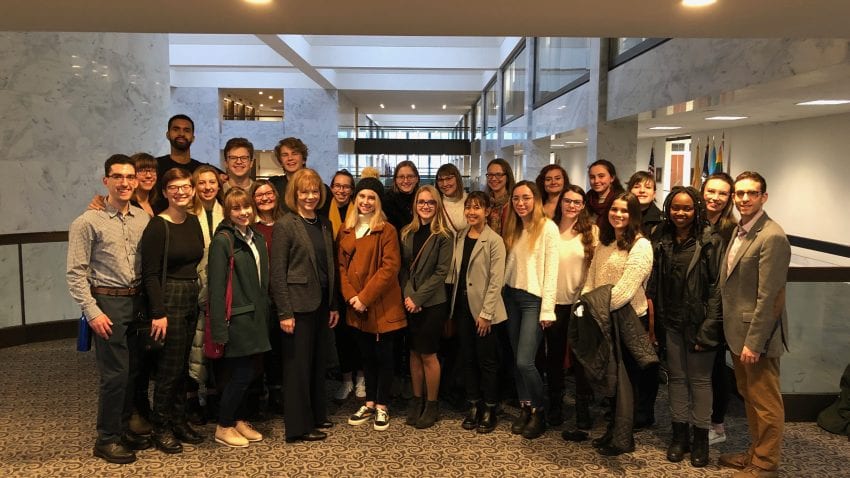 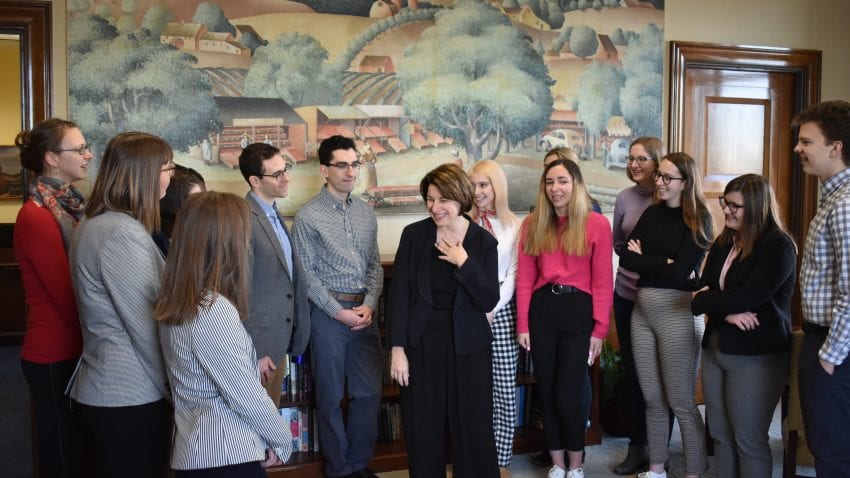 Another example of my non-stop reflection occurs every time I fly, when I decide that I must listen to the same album (Melodrama by Lorde) and journal. For whatever reason, this has become my in-flight ritual, as it is a time that I intentionally set aside for reflecting on whatever season of life that I am currently passing through or moving towards. On my flight to Washington DC, I wrote the words “I want to learn. I want to grow. I want to follow. I want to lead.” I believe that I was successful in fulfilling each of these goals during my time in DC through all of the meetings, site visits, performances, and experiences that shaped my month in the District of Columbia.

I want to learn.

I have learned how my skills, interests, passions, and curiosities are essential to my being and can be integrated into all aspects of my life, from hobbies to vocation. Through our policy proposal assignment, I was able to explore how a concept that I initially did not know was related to the arts, that of interfaith community engagement and development, could actually be grown and supported by arts practices, allowing me to further dive into a proposal that both intrigued me and allowed for copious learning.

I want to grow.

I believe that as I have continued to learn about the intersection of democracy and the arts from our various meetings, site visits, and performances, I have also grown in my understanding of the reality of the inner-workings of the federal government. This learning has given me room to grow in my personal knowledge of the intentions, desires, and values of US American politicians in the care that they take in their policies and politics.

I am so blessed to have gone through this program with such an incredibly talented group of individuals. I learned so much from not only following our fantastic program leaders, Louis Epstein and Alyssa Melby, but also through following my peers who offered incredibly diverse and notable perspectives on our experiences. This trip taught me to enjoy following those who are meant to be leading.

I want to lead.

With that said, I am also leaving this trip with a call to action in my ears. Our month in Washington DC made clear the power that each individual holds in this country. This program reminded me not only of the point of democracy, but also the point of art. Democracy is what gives a voice to each person in this nation, but art is what allows that voice to be heard. The dynamic culture of the arts scene in Washington DC reflects the development of personal civic identity that is essential to the success of the democratic system. The residents of Washington DC firmly believe in the concept of “showing up,” an idea that is sticking with me as I go back to my community and reflect on how I can show up. How can YOU show up? 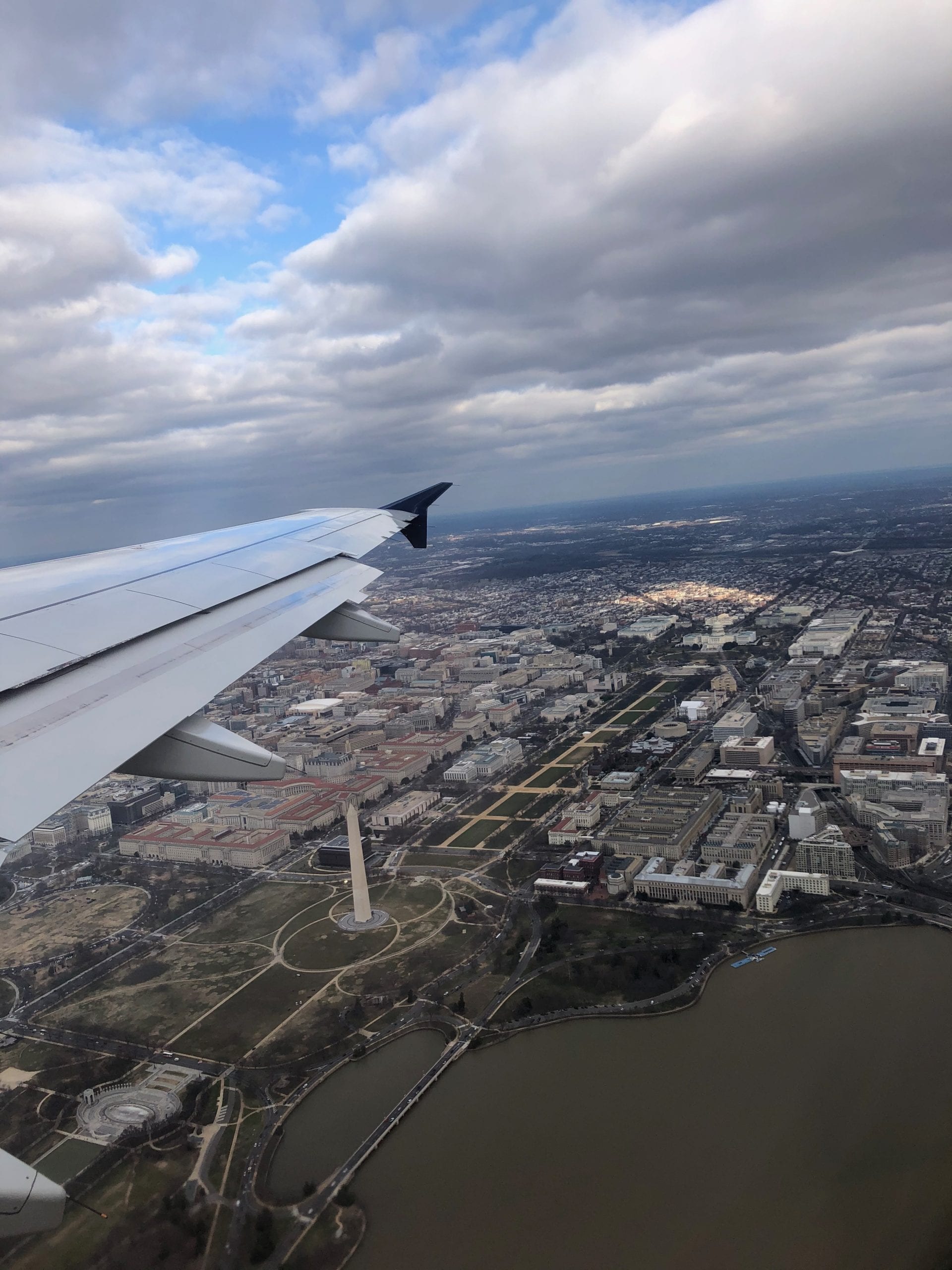 View of the National Mall from the plane leaving Washington DC