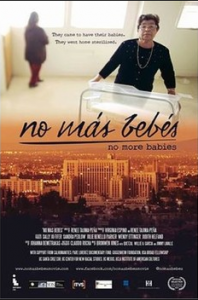 No Más Bebés Official Trailer from Renee Tajima on Vimeo.

“It was in 1907 that Indiana put the first law on the books broaching the subject of forced sterilization. Indiana was the first state to do so. Overall, thirty-five states had at one point had laws allowing forced sterilizations (http://abcnews.go.com/onair/2020/2020_000322_eugenics_feature.html). The subject even made it to the Supreme Court. In 1927 the Supreme Court upheld the Virginia state’s sterilization laws (Piotrowski, 2000). The case was Buck v. Bell and the decision led to increased sterilizations nationwide. Justice Oliver Wendell Holmes, in reaction to the outcome of the case in relation to the ongoing eugenics program in the U.S., stated that “three generations of imbeciles are enough.” President Coolidge said that “America must remain American,” which is in relation to the fact that some of those targeted for sterilization were immigrants (Piotrowski, 2000).”

2. “In 1909, California became the third state to pass — virtually without opposition — a forced-sterilization law. In 1913, state legislators amended the law to broaden its reach, seeking to target anyone with “mental disease, which may have been inherited and is likely to be transmitted to descendants.” What followed was the most zealous eugenics campaign in America.

From 1909 until its repeal in 1979, the Golden State coercively sterilized more than 20,000 of its citizens. Nearly a third of all the forced sterilizations in the United States were done in California. Various organizations were established to assist in ridding society of its costly subhuman defectives: the Eugenics Society of Northern California, the California Division of the American Eugenics Society, the Pasadena-based Human Betterment Foundation and others.

Other state legislatures followed suit and by 1924, 15 states had enacted similar sterilization laws.

Even Adolf Hitler took notice. In “Mein Kampf,” published in 1925, he celebrated the ideology. “There is today one state,” wrote Hitler, “in which at least weak beginnings toward a better conception [of citizenship] are noticeable. Of course, it is not our model German Republic, but the United States.” Hitler’s Reich deployed its own sterilization laws, nearly identical to those in the United States, within six months of taking power in 1933.
The U.S. Supreme Court ultimately weighed in on the issue. In Buck vs. Bell (1927), the court held 8 to 1 that the state, under its police powers, had the constitutional authority to segregate and systematically sterilize people to reduce the economic and societal burden they inflicted on the nation.

In the majority opinion, Justice Oliver Wendell Holmes Jr. wrote: “It is better for all the world, if instead of waiting to execute degenerate offspring for crime, or to let them starve for their imbecility, society can prevent those who are manifestly unfit from continuing their kind…. Three generations of imbeciles are enough.”

California officially apologized to victims for its repugnant act in 2003. But just 10 years later, the state’s prison system was found to have been sterilizing dozens of female inmates without lawful consent. Has our thinking really changed? Defending the cost of such surgeries, one prison gynecologist said, “Over a 10-year period, that isn’t a huge amount of money … compared to what you save in welfare paying for these unwanted children — as they procreated more.”

Why isn’t an apology enough? Why reparations? Our laws are steeped in this common-sense principle. If a physician amputates the wrong limb, the only acceptable remedy is monetary compensation for the harm, not an apology. Even under California eminent domain laws, the state must pay fair market value for property the state takes. Should not sterilization victims be compensated for such an egregious governmental taking?

California certainly should not accept the self-deceptive notion that an apology is a sufficient remedy for a state-sponsored program that expressly sought to kill off its citizens. Virginia and North Carolina legislators were universally applauded for taking the imperative step of compensating their living victims. No amount of money would be adequate, but compensation provides a level of healing and forgiveness. Most important, it shows the victims that they matter, they have value and they are equally important to the community. California was the third state to enact a forced sterilization law; it’s now time for California to be the third state to compensate its victims.Mark G. Bold is the CEO of the Christian Law Institute, which advocated for victims of sterilization and lobbied for reparations in North Carolina and Virginia.”

3. “A 1965 survey of Puerto Rican residents found that about one-third of all Puerto Rican mothers, ages 20-49, were sterilized. To put this figure in context, women of childbearing age in Puerto Rico in the 1960s were more than 10 times more likely to be sterilized than women from the United States. These shocking findings suggested that systematic bias influenced the practice of sterilization, not just in Puerto Rico, but in the United States as well.

“La operación (Directed by Ana María García, 1982) Ana María García created this forty-minute documentary to highlight the social policy of female sterilization in Puerto Rico. This island has the highest rate of sterilization in the world. Over one-third of its women have undergone what is commonly referred to as “La operación” (The Operation). García incorporates interviews with working-class and middle-class women of differing racial and ethnic backgrounds who have undergone this procedure. Rather than rely solely on interviews however, the documentary is intercut with action sequences and historical footage to make this a thought-provoking, yet entertaining work.”