Development of Laser Diagnostics
Our work in the laser diagnostics field was initially driven to develop experimental tools to study gaseous flows relevant to high-speed flight that include the supersonic (faster than the speed of sound) and hypersonic (Mach 5, or 5 times the speed of sound and faster) regimes. These flows are characterized by a number of distinctive phenomena that include the presence of shock waves and potentially non-equilibrium of internal energy modes and chemical reactions. The measurement of velocity and internal state distributions with high time spatial resolution can provide an insight into the effects of these complex phenomena on fluid behavior, ultimately leading to the development models that can predict this behavior accurately.

Our experimental work is largely based on Laser Induced Fluorescence (LIF). LIF is one of the most extensively used spectroscopic diagnostic techniques to study gaseous flows due to its high sensitivity and relative simplicity. The high sensitivity of LIF permits 2-D measurements by forming the excitation laser beams into sheets followed by imaging of the resulting fluorescence using a camera (Planar Laser Induced Fluorescence, or PLIF). The effectiveness of this technique is maximized when pulsed laser systems are employed, resulting in measurements with high spatial and temporal resolution.

The two-line thermometry technique is based on the determination of rotational-translational temperature from the ratio of fluorescence intensities resulting from two different absorption transitions. Given the ratiometric nature of this measurement, spatial variations in fluorophore concentration are common to both transitions and thus do not affect the temperature determination. The traditional approach to measure temperature using the two-line technique requires of a time separation between the two acquired fluorescence signals. Although a time delay on the order of 1 microsecond between the two fluorescence events would effectively accomplish an instantaneous temperature determination for slow-moving flow fields, a time separation in supersonic flows would incur spatial averaging along the direction of the flow displacements, resulting in a strictly non-local and non-instantaneous measurement.

We have recently developed an approach to perform instantaneous two-line thermometry, where the two fluorescence images are acquired simultaneously, eliminating the time delay that could lead to spatial averaging of the temperature measurement as well as the need of two separate cameras. Simultaneous imaging of two spectrally overlapping fluorescence signals arising from separate excitation sources is accomplished by embedding a spatial modulation pattern to one of these signals, and their subsequent separation can be performed using a spatial frequency lock-in algorithm. 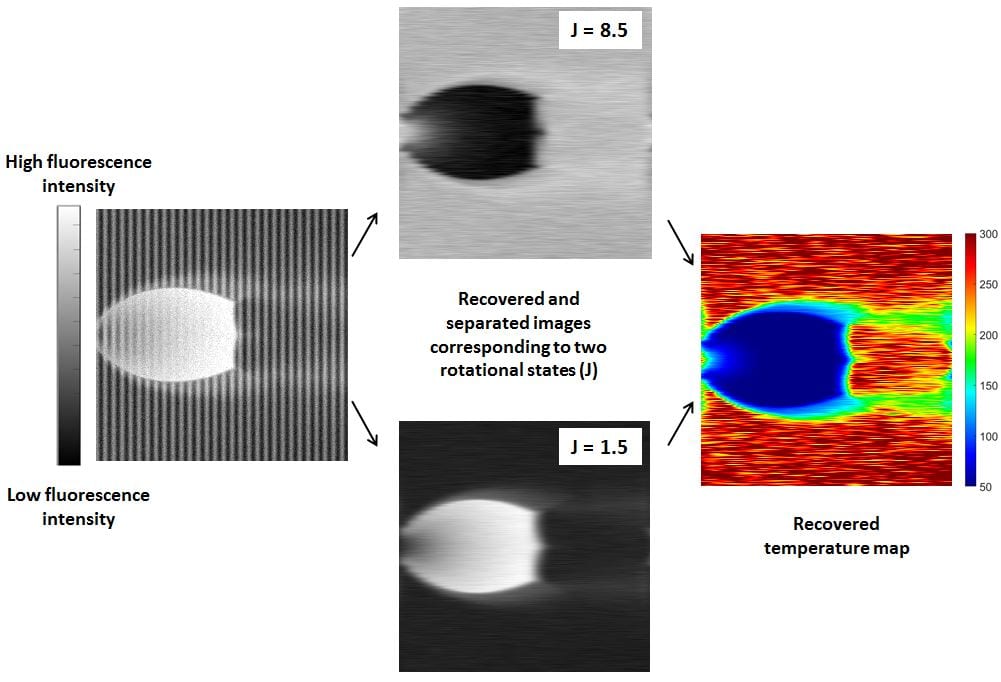