The men who fought in the world war were not heroes in the general sense of the word,” Professor Theodore Jorgenson proclaimed from the pulpit of Hoyme Memorial Chapel on Armistice Day, November 11, 1921. “They were ordinary human beings, afraid, perhaps cursing, not fighting because they felt no fear or weakness, but fighting in spite of their fears.”

Jorgenson’s Armistice Day speech urged listeners to honor the civilian soldiers of World War I. The speech came at an appropriate moment, as the St. Olaf College community had already begun the process of commissioning a war memorial for the college’s servicemen and women.

With the war three years gone, St. Olaf announced in December 1921 that two large bronze lamps would be erected at each side of the entrance steps to the gymnasium [currently the Theater Building] “to commemorate the patriotism and service of more than 600 St. Olaf men and women who served the colors.” The soldiers and sailors memorial committee of the St. Olaf Alumni Association set the project into motion, settling on lamps in response to the community’s opinion that the war memorial should be not just ornamental, but also useful.

The committee ultimately selected a design submitted by the Tiffany Lamp Co. of New York City, a division of Tiffany and Company Jewelers. John G. Mohn, class of 1899, son of former college president Thorbjørn N. Mohn, was instrumental in securing the one-of-a-kind lamps from such a prominent company. The spherical electric lamps stand about 4 feet tall and rest atop identical bronze vases. The committee requested that all students, faculty, and alumni association members donate one dollar each to fund the memorial.

Tiffany’s completed the design in time for the 1922 commencement ceremony, held June 12. At 9 a.m., John Mohn presented the lamps to President Lars W Boe. Against a backdrop of the college’s service flags, General Alfred W. Bjornstad, St. Olaf Academy, class of 1890, presided over the dedication of the memorial.

Following his address, Bjornstad presented Professor Olaf H. Thormodsgaard, class of 1916, with the French Medal of Honor for Epidemics, Médaille d’Honneur des Epidemies, to honor his wartime service in the Army’s 91st Division. The program concluded with the St. Olaf male quartet performing “In Flanders Fields,” and then the audience, accompanied by the St. Olaf Band, sang “America.” 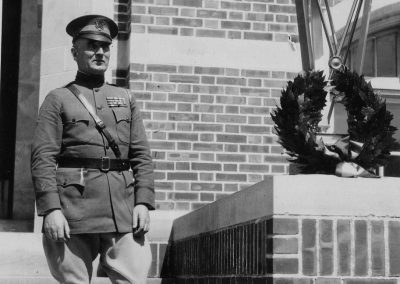 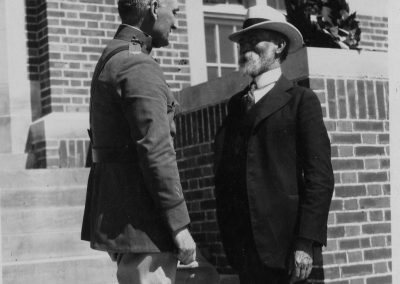 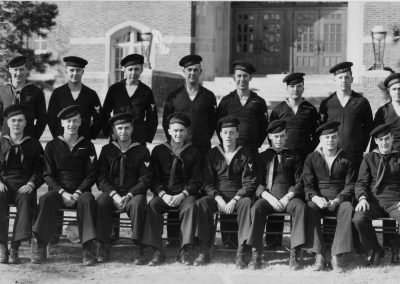 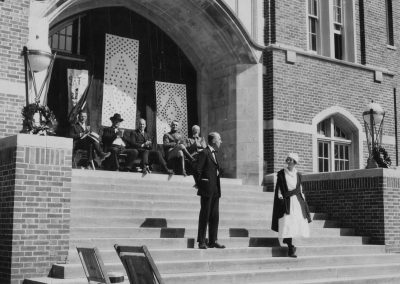 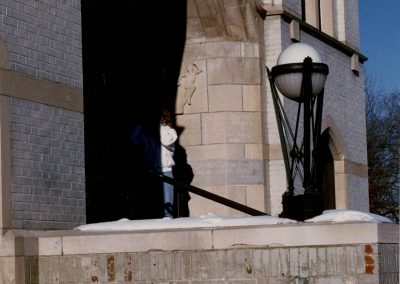 Dedication of the World War I Memorial Service Lamps, June 12, 1922.