Since its completion in the spring of 1948, the 150,000-gallon capacity St. Olaf Water Tower has attracted its fair share of mischief-makers. Students climbing to the top leaving their mark or engaging in clandestine activity have been the norm for each generation.

The 1953 yearbook, for instance, noted, “The water tower has gained fame from its abuse and frequent paint jobs.” One notable event occurred in 1974, during the college’s centennial observance, when someone painted “Happy 100th” in bright yellow letters.

The most notorious statement painted on the tower happened in the early morning hours of March 13, 2003, only days after the Iraq War was declared by Congress. Large red letters declared, “NO WAR NOW.” The headline in the student newspaper, the Manitou Messenger, reported, “Anti-war graffiti surfaces.”

Greg Kneser, then dean of students, said, “The fact that they painted this water tower as opposed to something downtown or anything like that, I would start asking questions among students. They went through a lot of effort to do a very thorough job. My sense is that it’s probably somebody who believes they did the right thing and had no idea of the consequences of what they were doing.”

Students on campus shared mixed emotions about the water tower’s defacement. Some thought the perpetrator(s) should have shown more respect and understood the negative effects, including the expense of repainting the tower, estimated between $6,000 and $20,000.

Kneser added that painting the water tower “harmed a lot of people. If it affects financial aid, somebody who doesn’t have the money to come to St. Olaf is going to get less money. If it affects repairs on something, it means walking in a mud path instead of a sidewalk. It could mean delaying renovation to a residence hall. It has completely different consequence than what they intended.”

The Manitou Messenger reported one year later that political apathy had prevailed on campus while the Iraq War waged. For one student, the water tower graffiti represented the political fire that he believed should return to campus. He said, “Someone needs to paint the water tower again.”

N.B. A full rehabilitation and repainting of the water tower took place in early June 2015. The project included miscellaneous structural repairs, cleaning, sandblasting, and painting of the interior and exterior surfaces of the tower. 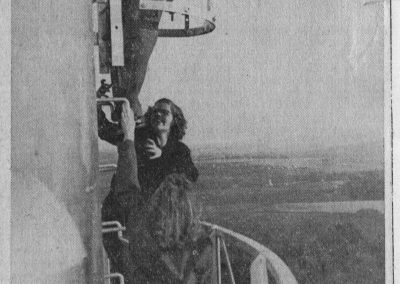 On Top of the World, Ma! 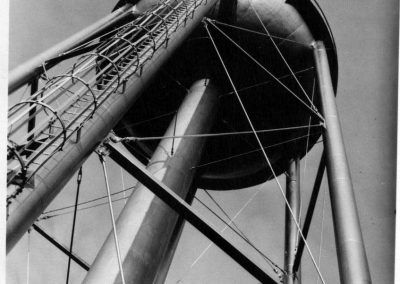 Climbing to the top is no small matter. 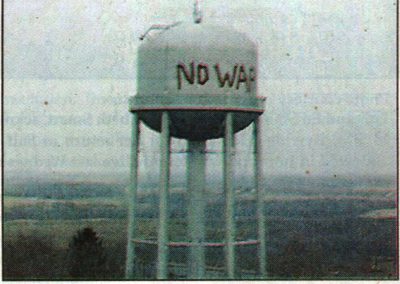 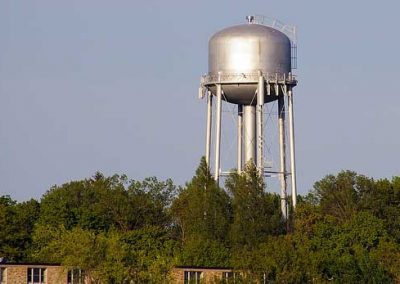 A shiny coat of paint given in 2003 after the “no war” incident. Students on campus shared mixed emotions about the water tower’s defacement. Some thought the perpetrator(s) should have shown more respect and understood the negative effects including the expense of repainting the tower, estimated between $6,000 and $20,000. 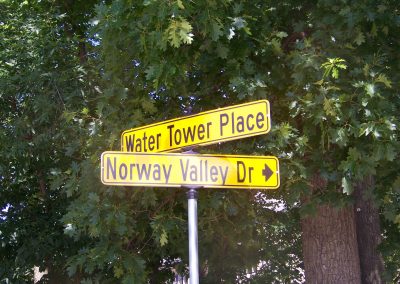 Believe it or not, the street signs and designations are a recent St. Olaf invention, ca. 2013. 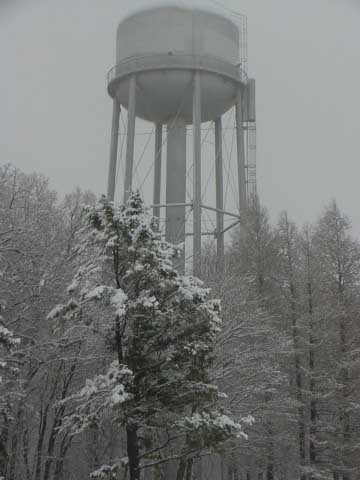 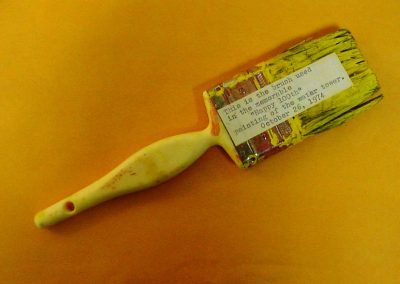