Nestled in Norway Valley are two domed water tanks which were constructed in the spring of 1961 for the city of Northfield. As early as 1904, the city placed its first water tank on Manitou Heights to take advantage of the natural elevation. In one college history, it was noted that “The woodpile and the water tank remained a hiding place for the ‘Order of Independent Smokers’ when its members thought they had to have an after-dinner drag.”

With the creation of the large capacity tanks in 1961, students strongly lamented the intrusion into Norway Valley. One student wrote in the student newspaper, the Manitou Messenger (September 29, 1961), “In keeping with the policy of discouraging romantic adventures, the Vale of Tawasentha (vulgarly referred to as ‘Norway Valley’) has been desecrated with the addition of two million-gallon capacity water towers for Northfield residents in case the Well or the Muni run dry.”

Another student, Jon Mathiason ’63 composed a letter to the editor, under the headline, “Water Tower Spoils Fun For Track Team, Lovers” (May 19, 1962). Mathiason wrote, “. . . the sad parting of that last refuge from civilization’s onerous jaws, the hill in Norway Valley, which was lately occupied by trees, but now is to be the ignominious home of the new Northfield water tower.” He added, “Here is my heartfelt testimony of our loss” and included a poem (below).

Since 1961, the water tanks have witnessed hikers, berry pickers, the occasional graffiti or other nocturnal activity, but rarely have they elicited an outcry from students. The 2010-2011 St. Olaf College Junior Counselor Handbook: Learning Sustainability in First-Year Residence Halls, simply states that the tanks “provide the water pressure for all the faucets in the city.”

“The curfew tolls the knell of parting day,”
The weary runner wends the race away,
The lovers too are in the Norway vale
When all together hear the fearsome wail.
The buzzsaw breaks the stillness of the air
And Oles bold are coursing up to share
The shock, the tremor, the remorse to see
The verdant hilltop as ’tis doomed to be.
O virgin hilltop, had you not the power
To resist the Northfield water tower?
Alas, alas, oh woe! The deed is done;
The hill is nude beneath the cruel sun.
Who knew the plan, what evil minds conspired
To defile the place where, their passions fired,
The stalwart sons of Viking blood did go
To celebrate the daughters of Manitou?
All the remains of that secluded glen
Are stumps awaiting low sadistic men
Who come to dredge the hold for Water Tank
Upon the treeless hill’s defiled flank.
Could yet our voices raise indignant cry
To offices and power way on high
Who move these evils underneath our eyes
With conscience that the highest bidder buys?
Nay, nay, too late to do but sound the knell
Upon fond mem’rie’s effervescent bell,
And read a requiem, singing mournful song
For onward our St. Olaf moves along. 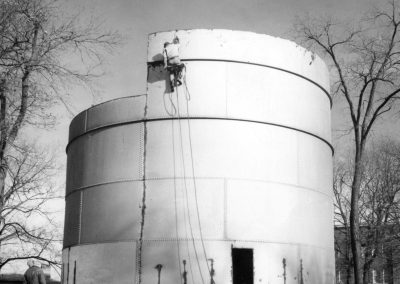 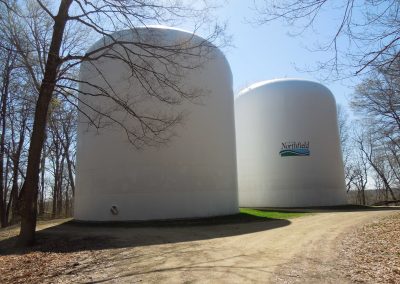 A view of the water tanks tucked away in Norway Valley. 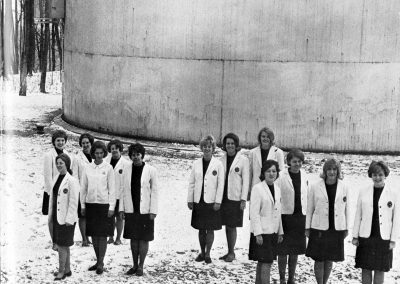 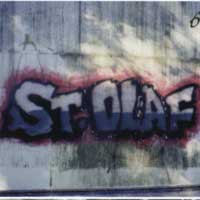