The State Bank building at the west end of the Fourth Street bridge is one of Northfield’s most distinctive buildings. Harry Wild Jones, the Minneapolis architect who designed it, said at its opening in 1910 that “another building just like it cannot be found in this country.”

Built in the Egyptian Revival style, it replaced a two-story wood building that had been home to a popular restaurant called The Grill; and before that, a shoe store.

In 1909, building owner William Pye decided that the odd-shaped parcel of land was the ideal place to locate a bank, since it was close to thriving businesses and the town’s two other banks.

The new bank’s distinctive design was inspired by the popular fashion of the day—all things Egyptian—which Americans had embraced following the wondrous archaeological discoveries in the Nile Valley beginning in the 1890s. The overall design and the partially sloped walls, called “battered walls,” suggest strength, stability, and safety, the perfect image for a bank.

The building’s bronze-plated doors opened onto the terrazzo floor of a circular lobby that was topped by a dome of colored glass. To the right of the entrance doors were the cashier’s office and three service windows. Along the street side was a customer work alcove with desk, chairs, and a seat set into the wall, as well as an elegant boardroom and a private consultation room.

All the furniture was made of mahogany, including a tall, circular, custom-designed customer service table that stood in the rotunda beneath a bronze chandelier. The
rotunda itself was defined by eight pillars that held up wooden beams. The counters were marble, and the teller cage grills were brass.

The design was functional as well as fashionable. The ceiling and floor of the bank’s fireproof vault were constructed of steel girders laid an inch apart, then filled with concrete. Its side walls were made of eighteen inches of concrete, plus a layer of brick, and its steel door weighed 2,200 pounds. Inside the vault was a solid steel double time-lock safe that weighed 5,000 pounds.

In 1929, just before the stock market crash, the State Bank was purchased by the holding company for Northwestern Bank. Many banks failed during the Great Depression that followed; the State Bank did not, nor did any of the other Northwestern banks. This was a point of great pride to Pye, who said, “[My] banks were kept sound and no depositor or stockholder ever lost a dollar.”

After the bank moved to 500 South Water Street in 1962, the Egyptian Revival building was occupied by a law firm, a travel agency, and a music store. In 1981, the parents of current owner David Hvistendahl purchased the building and began restoring it.

That process continues today. Though nearly all the original furniture and fixtures have been lost, Hvistendahl and his law partners are committed to returning the building to its former glory. 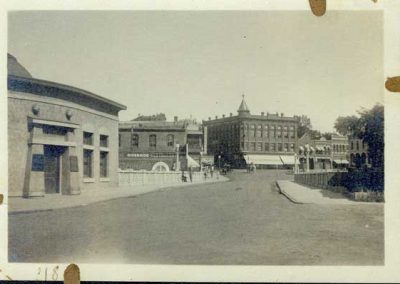 Looking east across the Fourth Street bridge. The State Bank Bridge is on the left.