Shakespeare Among the Vine and Pine

“St. Olaf Shakespeare Cast Give Play in Real Forest,” stated a newspaper headline for the 1924 spring inauguration production of A Midsummer Night’s Dream. Over the next seventeen years, until 1941, Norway Valley hosted twelve additional productions; all but one play were Shakespeare-based and performed in a deep ravine with a gently sloping tree-covered hillside that lent itself naturally as an amphitheater.

Under Professor George W. Spohn, the English department conceived of annually producing the plays in the heart of the Vale of Tawasentha (as Norway Valley was commonly called then). These open-air twilight performances were in many respects distinctive and so meritorious that they earned St. Olaf a regional reputation in the field of amateur dramatic productions.

Under the expert directorship of Elizabeth Walsingham Kelsey, the stage productions drew between 1,000 and 4,000 people for each yearly performance. Marie Malmin Meyer, an English department colleague of Kelsey’s, said of her, “We who have watched her work over the years have been impressed by her boundless energy: she drilled lines, she painted scenery, she managed the workmen, she sewed costumes. I think the Shakespeare actors of earlier days will especially recall the rehearsals in Norway Valley at 5 in the morning, when galoshes were standard equipment for both actors and directors and Mrs. Kelsey’s big coffee pot steamed cozily over a small bonfire.”

Carpeted by spruce needles, the greensward stage was backed by three towering Norway pines planted by the college’s founders in the early 1890s, along with an imitation wall. The long branches all but roofed the enclosure and gave the stage remarkable acoustics.

The enchanting atmosphere of violets and ferns, scented pines and setting sun compounded the pageantry of the gorgeous costumes, the cool starry nights, and the sound of the St. Olaf Orchestra playing. Concealed lights under a bower of branches cast a soft glow over the rows of spectators who sat either on blankets or plank seating.

With the advent of World War II, the Shakespeare outdoor plays concluded. John Berntsen, college carpenter, and scenery maker, said pointedly, “It wasn’t lack of culture that caused the death of Norway Valley plays; it was the mosquitoes.” 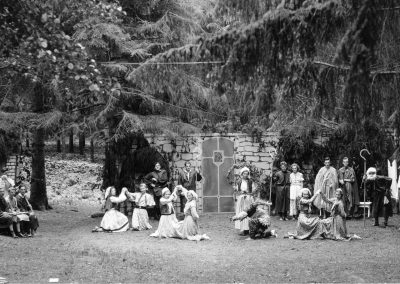 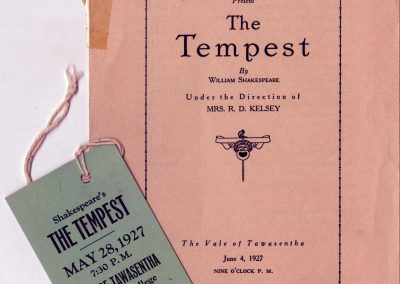 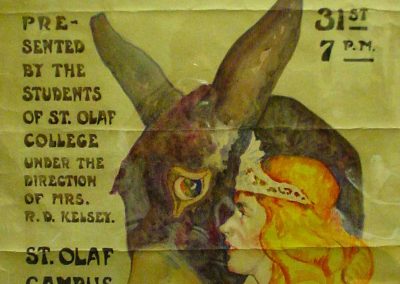 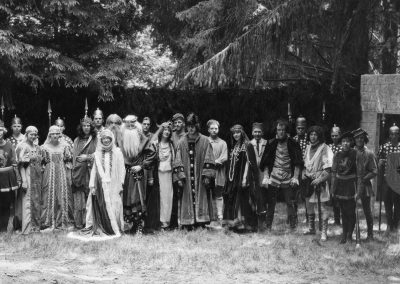 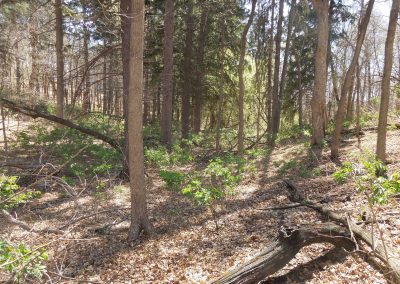 Current View: Shakespeare Among the Pines

This area of Norway Valley once saw the production of numerous Shakespeare plays but has since overgrown, leaving no remnants of its theatrical life. Creator Melanie Jones, April 27, 2015