“Take one big hole, fill with water, add a mixture of Oles and Carls, throw in a rope, splash around, make one big mess—it’s the Mud-Tug!” Aptly named, the annual freshmen tradition for St. Olaf and Carleton Colleges started in 1954 as a “worthwhile” event as the rivalry between the two schools had become outrageous at times with brawls and vandalism.

The Manitou Messenger noted in the inaugural year, “The freshmen on either side of the river saw each other as human beings in daylight, and when they sat down together for refreshments after the Tug they pretty much lost all interest in exchanging body blows come the night before homecoming.” [See site story Old Main Homecoming Bonfires.]

Although the tradition was short-lived, concluding in 1957, each school hosted the contest semi-annually: Carleton: 1954 and 1956 at Bell Field; and St. Olaf: 1955 and 1957 between Thorson Hall and Boe Memorial Chapel.

Three tug-of-war competitions took place based on weight classes: light (under 150 lbs.), medium (150-180 lbs.), and heavy (over 181 lbs.). Described as a “glorified irritation ditch” with muddy water no warmer than 40° F, the men tugged until one team slid grandly into muck ultimately meeting their “Waterloo.” 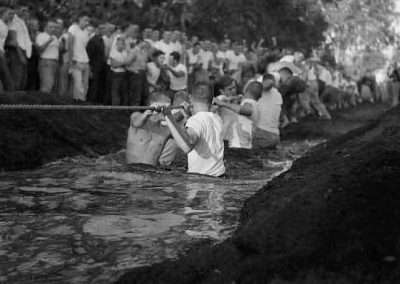 Working hard to pull themselves out of the mud pit, these freshmen are looking to win the Mud Tug competition of 1955. 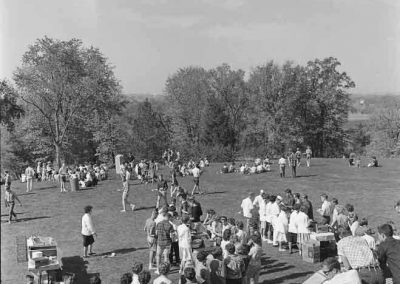 After the Mud Tug competition, the two student bodies gathered together for a picnic, ca. 1955. The picnic was to help encourage friendly relationships between the students of each school. 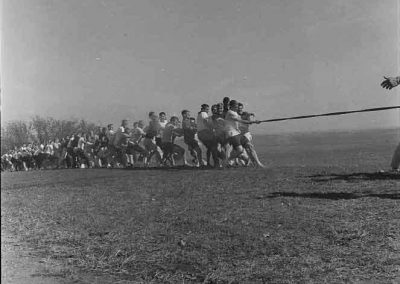 This large group of Ole freshmen are pulling their hardest in an effort to be crowned the Mud Tug champions, ca. 1955. 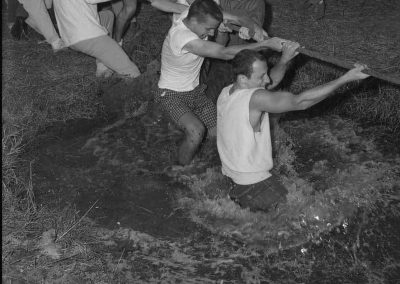 These freshmen are trying their best to pull themselves out of a four-foot-deep mud trench in the St. Olaf versus Carleton Mud Tug of 1957. 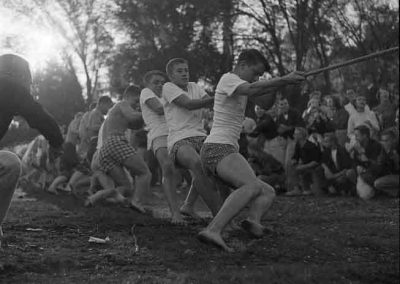 The crowd cheers on the Ole freshmen as they attempt to pull the Carls into the mire, Mud Tug 1955. 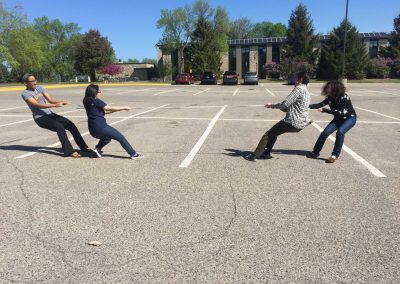 What was once a field that housed the short competition between St. Olaf and Carleton male freshmen is now a parking lot in front of Buntrock Commons. 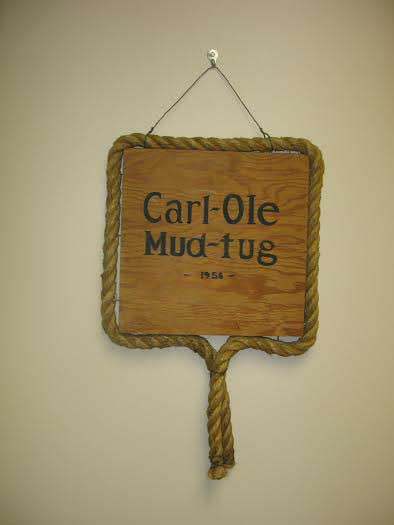 Sixty years have passed, but the pride of winning the annual Mud Tug lingers with this trophy still on display in the Carleton College Archives.