Northfield’s most well-known historic date is September 7, 1876. On that date, eight members of the notorious James-Younger Gang rode into Northfield intent on robbing the First National Bank of Northfield. The robbery failed because of the townspeople’s quick response to the raiders.

The raid started around 2 p.m. Three raiders rode across the iron bridge and tied up their horses in front of the bank. The three walked down the street and waited at the corner of the Scriver Building. Two others rode up south from Division Street. Seeing this, the original three started back toward the bank and entered. Clell Miller dismounted his horse and stood guard outside the bank door, while Cole Younger pretended to tighten his saddle. The remaining three raiders stood guard at the iron bridge.

Local merchant J.S. Allen attempted to enter the bank and was stopped by Miller. A fight ensued; Allen broke free and ran down the street yelling, “Get your guns, boys, they’re robbing the bank!”

Realizing they had been discovered, two bandits posted outside the bank as lookouts sprang to their saddles and began firing their pistols, yelling for everyone to leave the area or be shot. This forced the remaining robbers to enter the fray.

The first to fall was Nicholas Gustafson, a Swedish immigrant who did not understand English well. He was wounded in the head and died several days later.

Frank and Jesse James were not caught after the failed raid, but two weeks later, the others were cornered near Madelia, Minnesota. Charlie Pitts was killed during a furious gunfight, and the Younger brothers (Cole, Bob and Jim) were captured and sent to the prison in Stillwater. 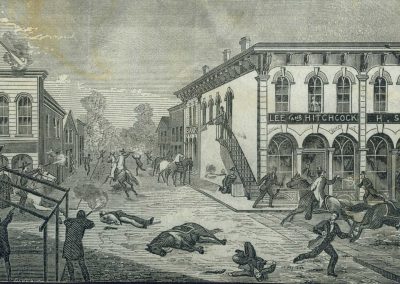 This woodcut was created by John Jay Lemmon for his book The Northfield Tragedy. 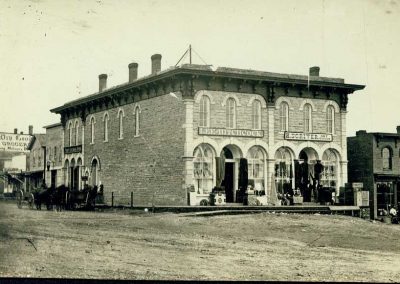 The Scriver Building in 1874, two years before the attempted robbery. 1874. 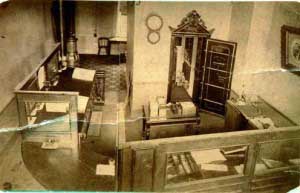 Interior of the First National Bank of Northfield. 1876. 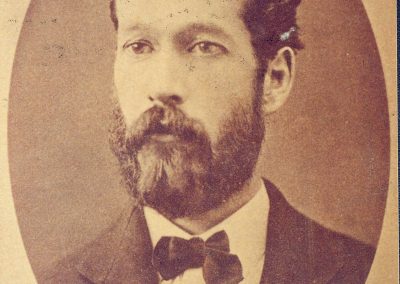 Joseph Lee Heywood was the acting cashier the day of the failed robbery. He was shot and killed by Frank James for refusing to open the safe. c. 1874.