In the summer of 1932, Arnold Flaten ’22 returned to campus after studying art in Europe for two years. Charged with creating an art department, and supported by a generous gift of $5,000 from the Carnegie Corporation to the college, Flaten designed and assisted in building an art studio based on a Norwegian “stabur” or storehouse. The exterior, finished entirely of wood, was stained with creosote, giving it the appearance of an old-country building.

In 2007, the college administration decided to remove the building from its original location to make way for the construction of Regents Hall of Natural and Mathematical Sciences. While the art building as a whole could not be saved, a number of pieces featuring carvings by Flaten and his students, including the ornate entry—the most iconic portion of the building—were preserved.

Six years later, the relocated Flaten_Art_Barn was dedicated on November 7, 2013. Located off a short gravel road called Windy Lane, the building is adjacent to the wind turbine (Big Ole) and the natural lands and hiking trails.

Although the shapes and sizes of the two buildings are similar, the new Flaten_Art_Barn is not a replica of the original building. Rather, it was inspired by it. And the new building—unlike the original—is a timber-framed structure built by St. Olaf faculty and staff who traveled to the North House Folk School in Grand Marais, Minnesota.

A certain beauty can be found in solitude, especially on a campus with 3,500-plus students, faculty and staff. The eyes of the Leirfallom carving have a meditative quality.

David Flaten, commenting on his father’s creations, said, “Most of my father’s art came out of his meditation.” He added, “Leaving your art is a record of what you loved in life.” 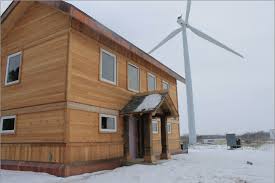 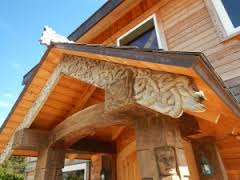 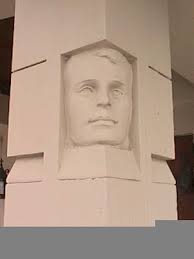