The phrase was derived from the vow taken by the men who signed Norway’s constitution on May 17, 1814. Supposedly after the signing, the men formed a circle about the room, joining hands and saying in Norwegian, “United and loyal till Dovre falls.”

She noted the alumni formed an outer circle surrounding an inner circle of the new graduates: “With the president of the Alumni Association presiding, the motion would be made to admit officially the new class into the Association. The graduates would step back into the alumni group to form one large circle and with arms crossed join hands and repeat the Alumni Pledge.”

The outdoor tradition apparently started around 1913 and continued until the late 1930s when the graduating classes became too large.

Hilleboe added, “When the classes became so large and the visitors so many the outdoor ceremony was discontinued, but a modified form was carried on in the Gymnasium at the close of the graduation exercises. With the present size of our classes and our outdoor commencements even this abridged ceremony is no longer feasible.”

“United and faithful while Manitou stands,”
St. Olaf alumni will gladly join hands,
And pledge Alma Mater by word and by deed
To loyally back her in every need.

In every-day conduct, in all our career,
We hold high her standard to eye and to ear;
As dutiful children we walk in her ways
And speak of her mission in merited praise.

Her brilliant success we have noticed with pride,
As she has attracted our youth far and wide;
We rally around her in unbroken ring,
To pledge her our love as we gratefully sing.

All hail, Alma Mater, on Manitou Heights!
We’ll champion her cause and we’ll safeguard her rights,
Her name we will shield and her honor defend;
St. Olaf alumni are true to the end!

We pledge our allegiance with heart, hand and voice
To share all her struggles, successes and joys;
We’ll promptly respond to her needs and demands,
“United and faithful while Manitou stands!”
—Nov. 6, 1919 (Founders Day) 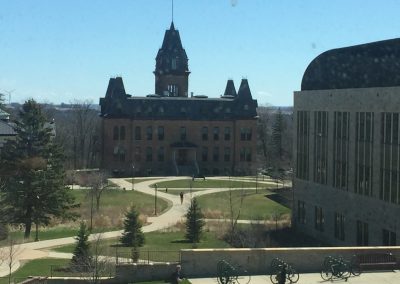 St. Olaf graduates used to stand in a circle by Old Main; the ceremony is no longer a part of the graduation celebration. 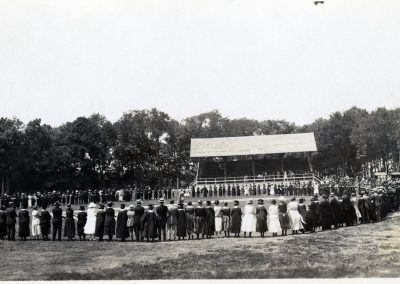 This photo was taken on in front of the old baseball grandstand, now the Mellby Hall green. 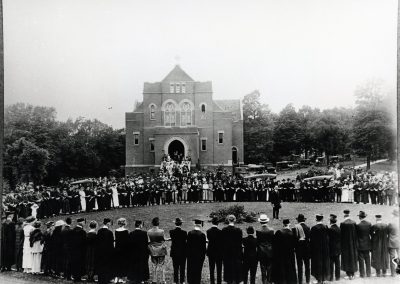 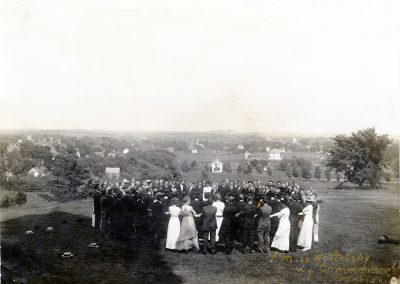 The first-ever alumni pledge ceremony for the newly minted sixty St. Olaf College graduates. This photo was taken in front of Old Main overlooking the town of Northfield.