The Railroad Grade: History and Legacy

The railroad grade that cuts through the Engeseth-Rinde (E-R) property is no longer in use but continues to leave a legacy on the land. Because the railroad has and will impact the nature of the restoration site, it is worth considering the railroad’s history, its effect on local ecology, and those factors’ effects on possibilities for the site’s future.

The E-R property is directly north and adjacent to the town of Nerstrand, which was one of many towns established along railroads and the rails were rapidly built in the late 19th century in Minnesota. The first tracks were laid in Minnesota in 1861, which brought new opportunities for settlement, agricultural activity, and access to far away markets. The peak of railroad building on the plains in Minnesota was the 1880s (Francaviglia  1972). The railroad grade that goes through the E-R property was built during this peak, in 1885 as part of the Hayfield to Rosemount segment of the the Minnesota North Western Railroad. This line was a part of the “granger roads.” Unlike other westward-looking rails in the state, the granger roads connected St. Paul to Omaha, Des Moines, and St. Louis. Many of the tracks laid south of St. Paul, including the Hayfield to Rosemount tracks, were the work of A. B. Stickney, a former lawyer whose interests turned toward railroads and worked to push rails to connect to market hubs south of the Twin Cities (Grant 210). The southeastern Minnesota granger rails carried commodity staple grains, corn and wheat (Francaviglia 1972) and also carried dairy products for an expanding milk product industry (Friends of Prairie Creek). 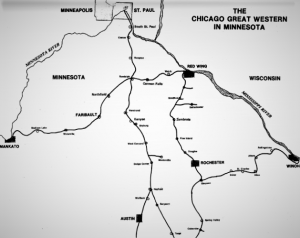 The Minnesota Northwestern Railroad was renamed the Chicago Great Western in 1892 (Marvig 2017). The two decades before this were times of huge growth and profit for railroads across America, as they not only carried farm products from new settlements back to Eastern cities, but expanded the frontier themselves, building lines into the West and inviting settlers to follow behind them and establish railroad towns (Francaviglia 1972). Railroads continued to generate wealth into the early 20th century, but a decline in freight and lack of traffic on branch lines led to economic trouble around 1910, and railroads then followed the pattern of the rest of the American economy: a boost from WWI led to prosperity in the 1920s, followed by hardship during the Great Depression and then revitalization during WWII (Bee et al 1984). However, the railroads suffered from two postwar transportation changes: commercial flights and the construction of 42,000 miles of superhighways (Bee et al 1984). The Chicago Great Western could not compete with faster transportation and lost most of its grain-hauling revenue (Bee et al 1982). In 1968, the CGW was absorbed by the Chicago Northwestern, resulting the abandonment of many rails. The line from Hayfield to Rosemont was abandoned in 1981 (Marvig 2017).

Impact on the Land

The Marshner map, compiled using data from the 1847-1907 Public Land Survey, provides a representation of Minnesota’s native landscapes at the time of European settlement (Wendt and Coffin 1988). Nerstrand is located at the edge of tallgrass prairie and a peninsula of maple-basswood forest that today is Big Woods State Park. It is difficult to say whether the E-R property was originally made up of woods or grassland, or fluctuated. This is further complicated by the fact that it is so close to the Big Woods remnant, and management decisions will have to consider this ecosystem as well. Currently, the property’s landscape matrix (the dominant landscape element) is agriculture, that, as it is phased out of production, will be restored to prairie. The railroad grade, however, is currently wooded. Since the property is being restored to prairie, and the railroad grade runs though the dominant landscape type, we will focus on the impacts of railroad grades on prairies rather than woodlands. 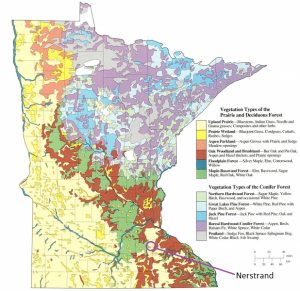 The Marshner Map of vegetation types in Minnesota at the time of the Public Land Survey. Vegetation near Nerstrand is both Maple-Basswood Forest and Upland Prairie (Wednt and Coffin 1988)

Railroad grades are the site of many preserved prairie fragments because they were built before the rest of the land was plowed, and because the rights-of-way along them were not farmed and thus maintained native species and unfarmed, but perhaps disturbed in other ways, soil (Merchant and Biederman 1999). Additionally, grade management activity to keep the lines clear often consisted of brush cutting and controlled burning, which helped keep woody plants from encroaching on the prairie remnant (Harrington and Leach 1989). Accidental fires started by sparks from passing trains also contributed to maintaining these patches (Merchant and Biederman 1999). Railroad surveys in 1978 and 1980 identified 875 miles of prairie remnant along Minnesota rights-of-way, making up a substantial portion of the state’s remaining native prairie (Merchant and Biederman 1999).

However, these remnants require constant maintenance to prevent them from invasion by other plants (Harrington and Leach 1989). This maintenance is present when rights-of-way are being cleared or burned on active railroads, but when lines are abandoned, management is no longer continued. We believe this is what happened on the E-R property when the Hayfield to Rosemount line was discontinued in 1981 (Marvig 2017). When we conduct our tree survey and examine the ages of the trees, we will have a more clear idea of when this forest began growing.

Harrington and Leach (1989) reinforce the fact that prairies can be easily invaded by shrubs and trees; we will have to be diligent in our tree survey to get an accurate estimate of the species that have come up and which ones could cause problems in the prairie restoration.

A popular option for abandoned railroad grades around the country is to repurpose them into hiking and biking trails due to their easy accessibility, gentle terrain, and historical importance to local communities. We hope to transform the railroad grade on the E-R property into an accessible recreational trail. As Laura Cohen, the Western regional director of Rails-to-Trails Conservancy, a nonprofit dedicated to the preservation of railway corridor said, “Railroads had such a pivotal role in the development of the country, especially in the opening of the West. Many communities’ identity sprang up around the railroads, so [preserving rail trails] preserves an important piece of American history” (Kimble 2011). The legacy of railroads and strategic preservation is important for keeping history alive while restoring natural landscapes that there is even a conservancy for it! This dedication to restoring the land and preserving a legacy is exactly what we hope to accomplish with the restoration of this railroad grade. By proposing signs for an educational trail, we hope to create a place where people can connect to nature and learn about their local history and its connection to American history.

We hope you continue to follow our blog as we further consider the ecology of the railroad, its impacts, status, and future considerations. We will look into the possibility of the railroad grade as small-scale landscape barrier and will also quantify the trees and types in the wooded area along the abandoned tracks of the iron horse.

Francaviglia, R. V. 1972. Some comments on the historic and geographic importance of railroads in Minnesota. Minnesota Historical Society. http://collections.mnhs.org/MNHistoryMagazine/articles/43/v43i02p058-062.pdf.