For this assignment, you will upload drafts, peer feedback, and revision work toward the completion of a 4-5 pp. narrative, which may be either fiction or nonfiction depending on your interests. Focusing on your emerging creative writing process, you will document and describe your skill development from the point of inspiration, generating a draft, sharing it with peers, and revising it for instructor review.

In 1952, Life Magazine featured “Life Goes to a Cat Show,” giving readers a behind-the-scenes view of a Los Angeles cat exhibition celebrating National Cat Week. The image of J.W. Blackford carrying two Siamese cats to the event inspired me to imagine him as a fictional character. What experiences led him to breed Siamese cats and to compete for best in show? Why was he carrying one by the leg and the other on his shoulder? Where was he going? I wanted to hear his voice, and so I decided to write a first-person monologue.

To prepare for the monologue and flesh him out as a character, I made a chronological list of possible experiences leading up to the moment captured in the image. Estimating he was 55 years old, I worked backward to age 35. I named him Oliver and decided that he desired to travel but felt trapped on his parents’ farm. By breeding cats and entering local contests, he was able to get out of town and see the country. He was a shy, quiet man who still lived at home and took care of his aging parents.

My first draft consisted of a description of the moment in which the photo was taken. I didn’t like the voice. It wasn’t specific enough. So I focused on building backstory. Where was he from? What are words that would let readers know about his background? 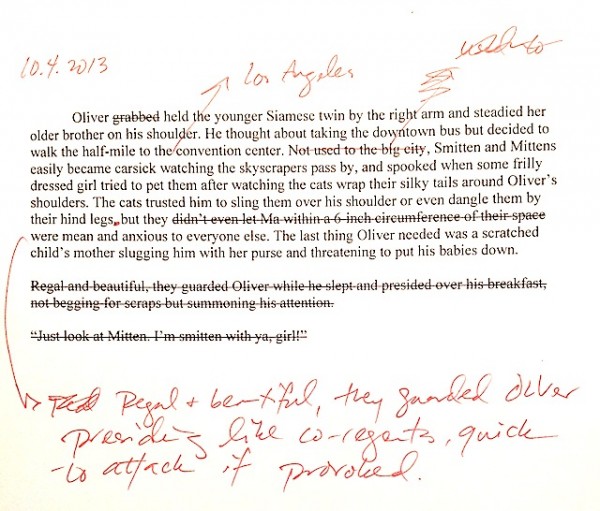 When I shared this draft with my peer Jennifer, I learned that she had trouble precisely seeing him because I didn’t use vivid details. Here’s what she wrote:

Oliver seems more like a flat character than a developed one due to the lack of detail specifying his attitude toward the cats. I can’t tell what he’s thinking. Is there a way to work more of his backstory into his thoughts in the moment?

Deciding that Oliver needed to win the cat show in order to pay for his parents’ healthcare was a huge step forward in building his voice. He wants to get away from his home and see the world, but he loves his folks and wants to take care of them. This conflict makes him a more complex character who is starting to write his own story in my imagination.