From the Oxford Dictionary of Philosophy: 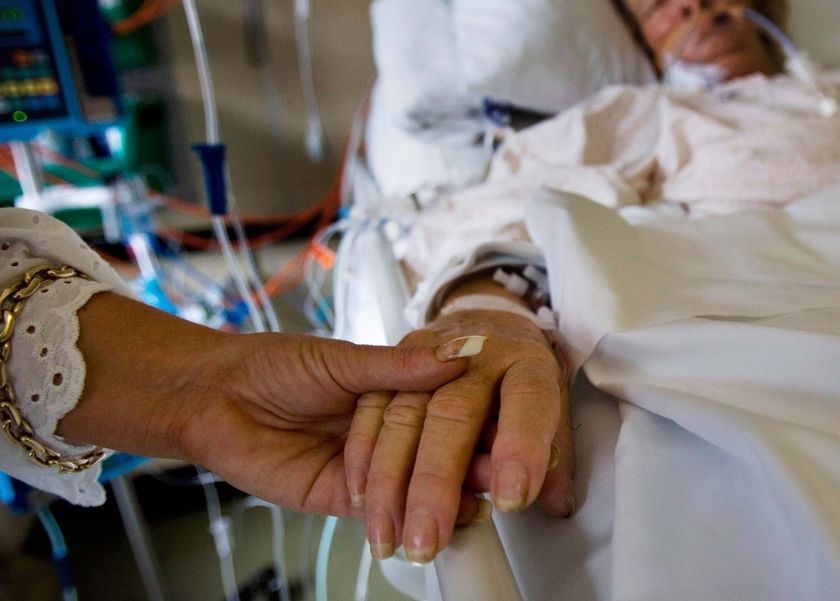 Euthanasia is a topic of debate loaded with the concepts of actions and omissions: when is it permissible to help someone end their life?

Acts/Omissions Doctrine: The doctrine that it makes an ethical difference whether an agent actively intervenes to bring about a result, or omits to act in circumstances in which it is foreseen that as a result of the omission the same result occurs. Thus suppose I wish you dead. If I act to bring about your death I am a murderer, but if I happily discover you in danger of death, and fail to act to save you, I am not acting, and therefore according to the doctrine not a murderer. Critics reply that omissions can be as deliberate and immoral as commissions: if I am responsible for your food and fail to feed you, my omission is surely a killing. ‘Doing nothing’ can be a way of doing something, or in other words, absence of bodily movement can also constitute acting negligently, or deliberately, and depending on the context may be a way of deceiving, betraying, or killing. Nevertheless, criminal law often finds it convenient to distinguish discontinuing an intervention, which is permissible, from bringing about a result, which may not be, if, for instance, the result is death of a patient. The question is whether the difference, if there is one, between acting and omitting to act can be described or defined in a way that bears general moral weight.

The Trolley Problem: Problem in ethics posed by the English philosopher Philippa Foot in her ‘The Problem of Abortion and the Doctrine of the Double Effect’ (Oxford Review, 1967). A runaway train or trolley comes to a branch in the track. One person is working on one branch, and five on the other, and the trolley will kill anyone working on the branch it enters. Clearly, to most thinkers, the driver should steer for the less populated branch. But now suppose that, left to itself, it will go to the branch with five people on it, and you as a bystander can interfere, altering the points so that it veers towards the other. Is it right, or obligatory, or even permissible for you to do this, thereby apparently involving yourself in responsibility for the death of the one person? After all, whom have you wronged if you leave it to go its own way? The situation is structurally similar to others in which utilitarian reasoning seems to lead to one course of action, but a person’s integrity or principles may oppose it.

Some hold that there is no morally significant difference between the two. On this view, occasions arise when killing a person may be no less bad or wrong than letting the person die.

Cooperation with Evil: Cases when a person aids or does not prevent an evil.  Cicero advanced the concept of passive injustice, when a person does not object to or protest an evident evil.  Traditional moral theology distinguished between formal cooperation (in which a person consents or agrees with an evil) versus material cooperation with or without consent (for example, a person sells or gives to a burglar tools needed for a robbery).