Journalism and Photojournalism have in recent years become hotbeds of ethical conversation. Alongside issues of non-partisanship and the accurate portrayal or description of events, discussions have become increasingly focused on which events, or which aspects of an event, 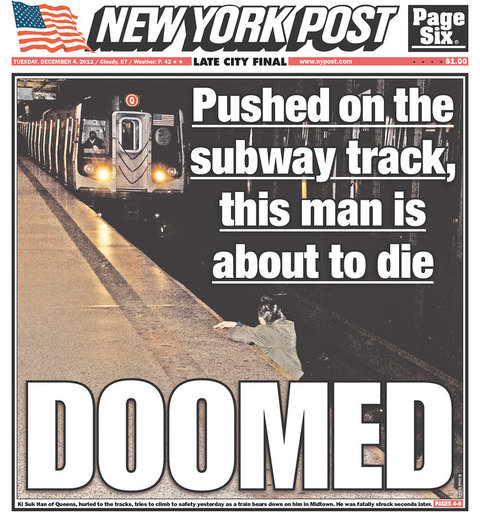 are appropriate to report or visually represent, especially with regard to photojournalism.

Some of the most heated ethical debate surrounds photographic depictions of suffering, death, and other controversial events. Take, for example, this image of a man moments before his death who was pushed in front of a New York subway, printed on the cover of the New York Post. Is such a depiction ethically flawed? Why did the photographer choose to take a photograph instead of trying to help the man climb out of the train’s way? Does depicting a person in their last moments violate his or her dignity?

Not only are there questions to be asked concerning the ethics of taking such a picture, but also of printing one. Does plastering the image of a person in need all over the front pages of newspapers say something about society? Are people attracted to these images because they are sadistic? Or do such images function to move people to act? (For example, images of starvation or injustice). What effect might printing these images have on family members of the person depicted? For a discussion of this particular image, CLICK HERE.

Under what conditions should a newspaper or magazine refuse to publish material that they believe will incite violence or mayhem? For example, was it wrong for the Jyllands-Posten newspaper to publish Kurt Westergaard’s cartoon of the Muslim prophet, Muhammed, when there was reason to believe that the publication would result in violence as the result of deeply offending members of the Muslim community?